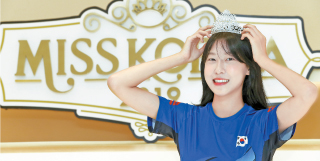 As well as strutting her stuff at the top beauty pageant in the country, Woo is also a Reserve Officer Training Corps (ROTC) cadet, a commentator and a member of the Korean national kabaddi team.

Woo has always had diverse interests.

Since she was little, Woo has always enjoyed playing sports, and her athletic career started as a hurdler.

After moving to Minnesota to study abroad, Woo was hired by the Korea Tourism Organization at age 20 but quit after only half a year.

When she quit her job, her dad encouraged her by saying, “live your own life.” Taking her father’s advice, Woo chose a trip to India.

Things completely changed after that trip to India.

During her visit, Woo saw little kids drawing a line on the sand and playing a game called kabaddi.

Kabaddi is a traditional contact sport originating from India. The aim of the game is for a “raider” to get to the opposing side of the court and tag out as many defenders as possible and then return to his side. However, the raider has to do so without getting tackled and while constantly repeating “kabaddi, kabaddi, kabaddi” so as not to draw a single breath.

On a 12.5-meter by 6.25-meter (41-foot by 20-foot) court, points are scored for each player tagged by the raider while the opposing team can earn points by stopping the raider.

“Kabaddi is like a combination of tag, dodgeball and martial arts,” Woo said. “Women’s games are played in a team of seven with 15 minutes on the court. You score when one offense successfully returns from touching the opponent’s defense.”

Woo immediately fell in love with the sport after watching the kids play it in India. As soon as she returned to Korea, she headed straight to the Korea Kabaddi Association. Woo joined the Korean women’s national kabaddi team in 2015, and in 2016, she helped Korea to win gold at the 4th Asian Women Kabaddi Championship held in Busan.

For the national team, Woo is a right side raider and is well known for her backwards kick, using her height, at 1.73 meters, as an advantage.

Aside from kabaddi, Woo is also a junior at Ulsan University. Not content with being a national-level athlete, student and Miss Korea finalist, she also applied to become a soldier and has been accepted as an ROTC cadet.

“I want to serve a long term as a soldier,” Woo said. “Since I’m confident in my physical condition, I’m thinking about applying to the special forces. Or since I can speak English and Chinese, I would like to be an interpreter officer.”

Beauty pageantry may seem like an unusual fit for the hard-kicking athlete-turned-soldier, but Woo decided to enter the Busan and Ulsan regional qualification round for Miss Korea after being persuaded by some of her friends.

“I competed without telling my parents,” Woo said. “But my mom was really happy [when she found out] because she said her dream was to be Miss Korea.”

After getting through regional qualifications, Woo finished as the first runner-up out of 49 finalists.

Despite her success, it wasn’t all smooth sailing - as Woo wasn’t especially familiar with the amount of makeup needed for a contest like Miss Korea. She said she had to ask the other competitors for help.

“I learned how to put on makeup,” Woo said. “In exchange, I taught them how to squat. People who haven’t had plastic surgery but are still pretty are called natural beauties. But I’m just natural. I worked really hard because I didn’t want to ruin the reputation of kabaddi and ROTC.”

This month, Woo will add another title to her already diverse resume. At the 2019 Chungju World Martial Arts Masterships, starting on Aug. 30 at North Chungcheong, she will be commentating on the kabaddi games in English.

“I can’t compete as a player because I missed three months of training for Miss Korea,” Woo said. “It’s disappointing, but I want to spread kabaddi as an announcer [commentator].”