On ‘Be Melodramatic,’ adulting is a joke

On ‘Be Melodramatic,’ adulting is a joke 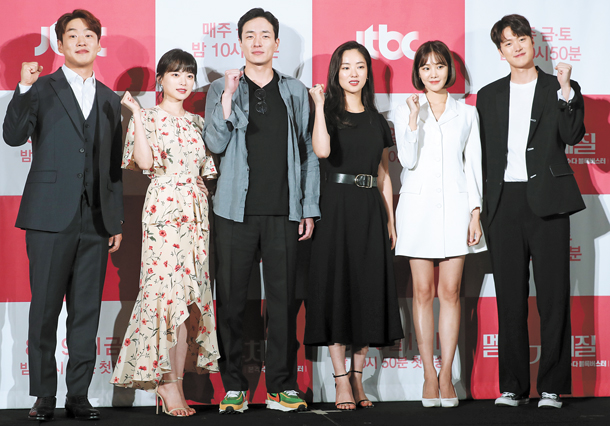 The director of this year’s hit film “Extreme Job” is back with the laughs, but this time, it’s with an all-female cast on the small screen.

The JTBC drama “Be Melodramatic” tells the story of three 30-year-old friends who are still growing up. Though their jobs may appear glamorous - a drama screenwriter, a documentary director and a marketer at a drama production company - the women find it challenging to meet the demands of adulthood and struggle with difficult bosses and relationship issues. By sharing their troubles and laughing them off, the women gradually mature as they continue to find their place in society.

“Be Melodramatic” is director Lee Byung-hun’s TV drama debut. According to Lee, who also helped write the screenplay, the decision to present the story as a TV series came naturally.

“I’ve prepared for this drama since my 2015 movie ‘Twenty,’” said Lee at a press conference on Thursday in Yeouido, western Seoul. “I wanted to discuss the stories of people, not just women, who were starting anew after coming out of relationships. This story was too much to spin in two hours so I opted for a drama format.”

Lee added that “Be Melodramatic” may almost feel like stand-up comedy as it is script-heavy, unlike his earlier blockbuster “Extreme Job” which featured a lot of action.

Actresses Chun Woo-hee, Jeon Yeo-been and Han Ji-eun will play the dynamic protagonists alongside Lee Jae-hong and Gong Myung, who play the love interests in the series.

While Chun is a widely acclaimed actress who’s scored several big awards like Best New Actress at the Baeksang Arts Awards, she is stepping out of her comfort zone in “Be Melodramatic.” Most of the actress’s notable works like “Sunny” (2011), “Han Gong-ju” (2013) and “The Wailing” (2016) feature her playing dark and tragic roles.

“I think I wanted to be happy, and I had a thirst for comedy and romance projects,” Chun said, explaining her decision to participate in “Be Melodramatic.” “I’m curious how people will see me - there are many moments when I’m just being myself on the show.”

“Be Melodramatic” airs on Fridays and Saturdays at 10:50 p.m. on JTBC.