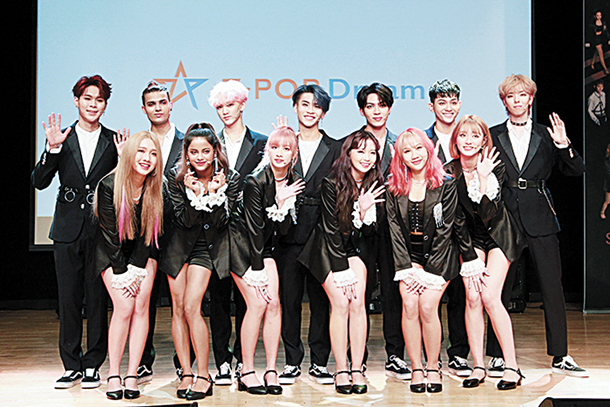 Z-Girls and Z-Boys, a K-pop inspired girl and boy group made of entirely non-Korean members, appear at a press conference on Thursday in southern Seoul. [ZENITH MEDIA CONTENTS]

Although their style and choreography scream K-pop - think glittery makeup, colorful hair and synchronized dance moves - there’s something remarkably different about groups Z-Girls and Z-Boys. They are based in Seoul, but the groups are made up entirely of non-Koreans and only sing songs in English.

Collectively called the “Z-Pop Dream Project,” the two groups are the brainchild of entertainment producers from Korea and across the region hoping to create the next superstars of Asia.

“I’ve gone overseas to hold K-pop concerts countless times over the years, but I found that there were aspects about K-pop that my global partners were tired of,” said “Z-Pop Dream Project” co-founder Jun Kang at a press showcase also attended by Z-Girls and Z-Boys held in Gangnam District, southern Seoul, on Thursday. Kang serves as CEO of Zenith Media Contents, an entertainment company, and claims to be an industry veteran with experience at SM Entertainment, Korea’s largest management agency.

“We worked with professionals in the K-pop industry and discovered stars all across Asia. Our goal was to create a K-pop project based on cultural exchanges with many countries,” said Kang.

Z-Boys and Z-Girls each include seven members hailing from different regions: the Philippines, Indonesia, Vietnam, Thailand, India, Taiwan and Japan. All of them were born in or after 1995, making them part of Generation Z, the demographic the project is targeting.

The two groups officially debuted this February when they held their first concert “Z-POP Dream Live” at Jamsil Stadium in southern Seoul, upon releasing their first joint single “Z-POP DREAM.” 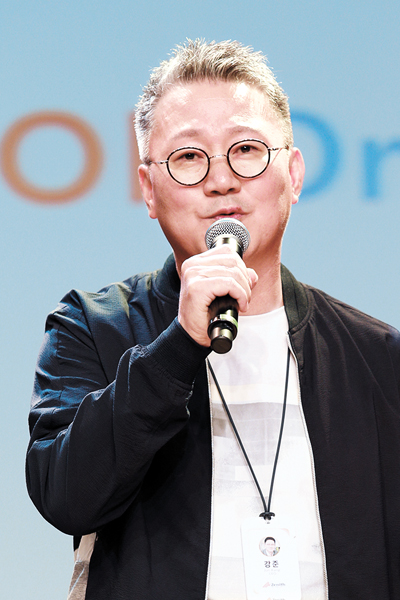 Since their debut, the groups have amassed a considerable fan base through multiple TV and press appearances throughout Asia. Ahead of their Seoul showcase, the groups met up with fans and reporters in Indonesia, Vietnam and the Philippines and performed during the semifinal round of “The Voice Indonesia.” The YouTube video of that performance has garnered over 1 million views, and the official music videos of their tracks “Holla Holla” and “Streets of Gold,” released last week, have 1.7 million and 2.4 million views, respectively.

“There are many aspects that we lack compared to [other] K-pop [acts], and we faced a lot of language barriers in training and creating the group.”

Although many of the members speak considerable Korean - Z-Girls’ Taiwanese member Joanne and Indian member Priyanka answered reporters’ questions in near-fluent Korean - the challenges continue. Ironically, it’s Korea where the group faces some of its biggest barriers.

“We really want to appear on Korean TV music programs, but the barriers for entry are too high,” Kang lamented. “I’ve been working in the industry for 30 years and have many connections, but music shows tell us that they want K-pop and Korean songs and that our groups don’t fit in.”

“I disagree with what they say,” Kang continued. “If in other countries, television shows broadcast people of diverse cultures, why must we sing only Korean songs here?”

If the members felt stressed about the challenges they face, they certainly didn’t show it during the showcase on Thursday, their first for Korean press. On Thursday, both Z-Girls and Z-Boys were all smiles, enthusiastically performing tracks from their new single and talking about their favorite K-pop stars like U-Know Yunho from TVXQ and Taeyeon from Girls’ Generation.

The producers have even greater ambitions for the future. They are already planning to form multicultural boy and girl groups every year, expanding the range of regions the members represent. Also, they plan to use an Ethereum-based digital coin to facilitate purchases like concert tickets and merchandise.

“Z-pop started with the goal of giving hope and dreams to young audiences,” Kang said. “We tell the members in our groups that they are representatives of their country and that they can return to their homes and teach younger generations the techniques they learned from Korea.”