The nominee for the nation’s top financial regulator said Friday he will spare no efforts to stabilize markets as volatility increased over the U.S.-Chinese trade war and the Chinese yuan’s slide.

Eun Sung-soo, chief executive of the state-run Export-Import Bank of Korea who served at the Ministry of Economy and Finance for about three decades, was picked by President Moon Jae-in to head the Financial Services Commission (FSC). 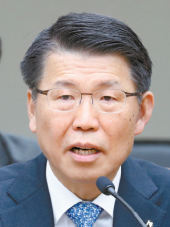 Eun told reporters that he will also speed up efforts to bring innovation to the financial industry.

If appointed, he will be tasked with slowing down the nation’s mountain of household debt and restructuring some of the country’s bloated business sectors.

Eun reaffirmed the FSC’s pledge to support Korean firms that are affected by Japan’s trade curbs, adding there is no unusual movement in the nation’s financial system in the wake of the unprecedented retaliatory step by the neighboring country.

The 58-year-old Eun has been credited with stabilizing the nation’s financial markets following the 2008 global financial crisis and the European debt turmoil.

Eun, who had served in various capacities at the Finance Ministry since 1983, was director of the international financial division between 2011 and 2012.

In Korea, a cabinet appointment and certain key policy posts, such as the head of the FSC, are subject to parliamentary hearings although they do not necessarily require the approval of lawmakers to be appointed by the president.