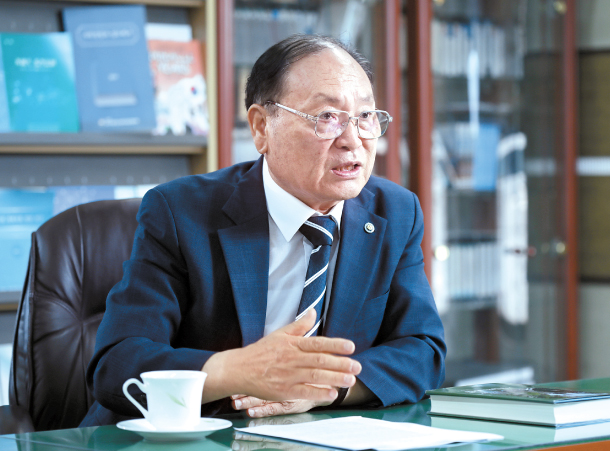 It’s not too late to withdraw the government’s plans to revoke private high school’s autonomy said Yoon Nam-hoon, chairman of the Korea Association of Private School Foundations, an organization that represents around 900 corporations of private elementary, middle and high schools across the nation.

The assessment follows guidelines provided by the Ministry of Education, but local education offices do not have to stick to these outlines and are free to alter them if they wish.

However, the Ministry of Education, which has the final say on the decision, announced last month that Sangsan’s autonomous private high school’s special status will not be revoked.

Sangsan’s assessment fell to the North Jeolla education office, which drew major backlash after it decided to change the guidelines provided by the Ministry of Education and raise the minimum passing score from 70 points to 80 points out of 100.

Autonomous private high schools are financially independent from the government. In return, they are granted more freedom in choosing students and developing their curriculum and tuition.

They are also funded by corporations. The eleven schools that failed their assessment this year had a total of over 7.7 billion won ($6.5 million) of yearly funds from corporations, which is tantamount to the combined operation costs of 20 public high schools in Seoul.

If these autonomous private schools are turned into public schools, taxpayers’ money will fund them. The Seoul education office recently announced that it will pay each of the autonomous private high schools that are turned public schools an additional 2 billion won in total for five years, which is a significant amount when added to the government funding that the schools will receive.

The JoongAng Sunday sat down with Yoon last month to talk about what he calls injustices regarding the government pushing to change autonomous private high schools into public schools.

Below are edited excerpts of the interview which were condensed for clarity.

Q. Do you think you can accept the decisions of the Education Ministry when it accepts the Seoul education office’s assessments of private schools and turns them into public high schools?

A. The assessments of autonomous private high schools was pushed to abolish these types of schools with the claim that they create a hierarchy and impoverish public schools. Because the passing score of schools [by some education offices] was increased from 60 to 70 or 80, the categories on which the assessment was based became ambiguous. Education superintendents’ evaluations had a big say in the assessments, which was left to their discretion, so the assessments lost their fairness and equality. In Seoul’s case, even though [the city’s education office] notifies schools of their inability to receive a passing score in their assessment, they don’t specify the exact score that they received. In a situation like this, if the Education Ministry revokes a school’s autonomous status, schools have no choice but to accept their fate. It is not too late to withdraw the plans to revoke private high school’s autonomy, which is the right thing to do.

How does the Korea Association of Private School Foundations plan on responding to the unfair assessments by education offices?

Even if the Education Ministry does not put the brakes on the unfair assessments by the education office superintendents and agrees with them, we will consult with autonomous private high school faculties and support them in taking legal action.

Where do autonomous private high schools stand in the private school area?

Why can’t corporations of private schools have any say in the hiring process of teachers at their schools?

[The Education Ministry] is demanding recruitment exams of teachers be entrusted to education offices, claiming there is a lot of corruption in the process of hiring teachers by private schools.

What is your biggest worry as a person who manages private schools?

Instead of complementing and encouraging those who offer their entire fortune and manage schools, people are treating them as if they are criminals. It is depressing. A chairman of the board of directors at a private school said that he wanted to climb on top of a roof and commit suicide.

Is it true that private schools provided education the Korean government could not offer because of its budget?

No matter how easy it is to forget about the past, I wish people would remember private schools’ role in taking responsibility of an education system that the government could not offer in the difficult times of the ‘60s and ‘70s.

In an education system that is offered for free, schools cannot manage themselves by gathering tuition. Instead of being deprived of their right to collect tuition, schools will rely on financial support from education offices. If that happens, schools won’t be able to refuse unjust demands or management by education offices.

Private schools’ chairmen of the board of directors are said to be paying their social insurance with their own money.

Chairmen of boards of directors of private schools are prohibited from receiving salaries from schools’ corporations. That is why [chairmen] pay for their health insurance out of their own pockets. Movies portray chairmen as people with great power, but that is not true. Currently, they are not allowed to be involved with the management of schools. However, when there is an event that occurs within schools, chairmen are held responsible. Sometimes, chairmen have to compensate victims of school violence, including those subjected to physical punishments by teachers, when the victims sue the school for damages.