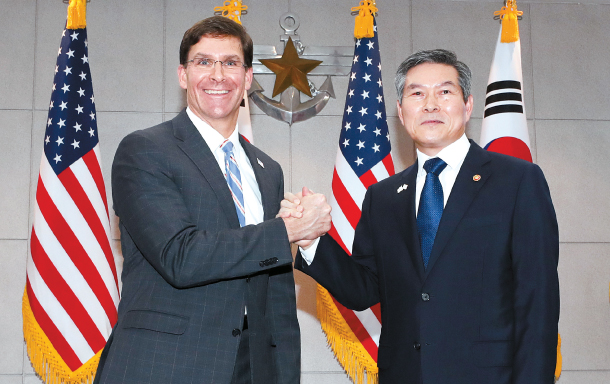 Esper, who arrived in South Korea on Thursday for a two-day visit, was greeted at the Defense Ministry’s headquarters in central Seoul by Jeong, who stressed that their meeting coincided with a “very urgent security situation in Northeast Asia.”

The two sides were expected to discuss a host of alliance issues in the meeting, including North Korea’s recent missile tests, the future of a bilateral intelligence-sharing agreement with Tokyo and most notably the United States’ recent calls for the South to take on a larger cost burden in the stationing of U.S. troops in its territory.

As he reportedly did to Tokyo’s Defense Minister Takeshi Iwaya on Wednesday, Esper made a request to Jeong during the meeting that Korea join a U.S.-led coalition to protect shipping in the Strait of Hormuz against possible Iranian incursions in line with a freedom of navigation principle, according to a Korean Defense Ministry official. Jeong responded that Seoul was aware of the importance of the strait and that it was considering “diverse options” in regard to protecting Korean vessels and citizens in the area. The Korean Defense Ministry, however, said Esper’s remarks were not a formal request for military deployment.

Calling the “ironclad” Korea-U.S. alliance the “linchpin of peace and security” on the Korean Peninsula and in Northeast Asia, Esper said in his public remarks before the meeting that Washington would continue to closely coordinate with Seoul to maintain UN sanctions on North Korea and push for Pyongyang’s “complete, verifiable and irreversible denuclearization” through diplomacy.

The South Korean Defense Ministry also announced before the meeting that the two defense chiefs would discuss the envisioned transfer of wartime operational control, or Opcon, from the United States to South Korea, whose capacity to carry on the responsibility is currently being tested with combined military exercises throughout this month.

North Korea retaliated to the drills by staging a string of weapons tests in recent weeks, openly citing the exercises as a threat to its security through its state media. Jeong said the North was repeatedly carrying out actions that “certainly do not help alleviate military tensions on the peninsula” and called for closer coordination with the United States.

Neither side mentioned what aspects of the cost-sharing issue would be discussed at the meeting. Seoul’s Ministry of Foreign Affairs said Esper did not mention the issue when he met Foreign Minister Kang Kyung-wha earlier on Friday.

Yet it is almost certain that Washington will be asking Seoul foot a larger share for the upkeep of the 28,500-strong U.S. Forces Korea, given U.S. President Donald Trump’s claims on Twitter Wednesday that Seoul had “agreed to pay substantially more money to the United States in order to defend itself from North Korea.”

Saying cost-sharing negotiations have already begun, Trump added another claim that South Korea paid $990 million last year at his request and that it now feels “an obligation to contribute” further.

The real figure, arrived at in March after months of rather prickly negotiations, was some $920 million, but with the bilateral agreement set to expire at the end of the year, the Trump administration is likely to up its demands.

The Blue House on Friday denied any such proposal had been delivered through Bolton, with a senior presidential official telling reporters that the time was ripe for negotiations over cost-sharing to kick off.

With regards to the intelligence-sharing pact between Seoul and Tokyo, called the General Security of Military Information Agreement (Gsomia), Esper made no public mention on Friday, though while en route to Tokyo on Tuesday, he urged that the pact be retained “in our common defense, if you will, against North Korea.” He further said he would ask Seoul and Tokyo resolve their diplomatic differences to “really focus on North Korea and China.”

Esper was expected to bring up the topic of a maritime coalition to protect the Strait of Hormuz from Iranian incursions, in his talks with Jeong, as he reportedly did to Tokyo’s defense chief on Wednesday.

Jeong said at a National Assembly briefing earlier this week that South Korea was considering “diverse options” in regards to protecting its vessels in the Strait of Hormuz.

Esper concluded his trip with a meeting with President Moon Jae-in Friday afternoon, in which Moon congratulated Esper and asked for his help in continuing to strengthen the South Korea-U.S. alliance and supporting denuclearization negotiations with the North.

Esper told Moon that he believed Trump’s recent meeting with the North’s leader at Panmunjom in June showed that dialogue could continue and expressed hope that talks would resume in the near future.