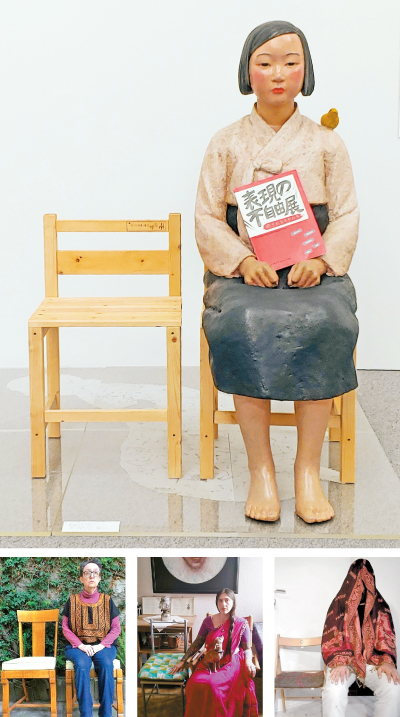 Top: A pamphlet for the "After ‘Freedom of Expression?'" exhibition was placed on the "Statue of Peace" after the decision to remove the statue from the exhibition at the 2019 Aichi Triennale was made on Aug. 3. Above: Mexican artist Monica Mayer, far left, and other participants in the "Being a Statue of Peace" movement to protest Japanese censorship have uploaded photos of themselves posing like the statue on Instagram. [YONHAP, INSTAGRAM CAPTURES]

The movement is a protest against the Aug. 3 closure of an exhibition of the “Statue of Peace,” which symbolizes the Korean women forced into sexual slavery for Japanese soldiers during World War II, at the Aichi Triennale art festival currently ongoing in Aichi Prefecture, central Japan.

Amid threats from far-right Japanese citizens and pressure from some Japanese politicians, Daisuke Tsuda, journalist and artistic director of the triennial, one of the biggest international art festivals in Japan, announced the decision to scrap the exhibition, citing the safety of the festival’s staff.

Ironically, the statue was part of an exhibition titled “After ‘Freedom of Expression?’,” which was intended to be an open-minded examination of artworks whose exhibitions had been rejected by Japanese museums in recent years.

Aichi Triennale’s decision came after Nagoya Mayor Takashi Kawamura told the press Aug. 2 that the Statue of Peace “tramples on the feelings of Japanese,” calling for its removal, according to Japanese newspaper Asahi Simbun.

“Nagoya Mayor Takashi Kawamura, Osaka Mayor Ichiro Matsui, as well as conservative members of the Diet, have acted beyond the scope of their duties to criticize the ‘After ‘Freedom of Expression?’’ exhibition and its content, against the backdrop of worsening relations between Japan and South Korea in recent months,” Tsuda said in a personal statement issued later.

“Politicians in positions of power, criticizing a local-government-led cultural project and demanding its suspension is clearly a form of censorship. But the situation is not a simple story of the Aichi Governor and myself succumbing to state power and exercising censorship,” he added, citing the hundreds of threatening phone calls and faxes the staff received, some even suggesting a “terrorist attack.”

“It is true that the exhibition received hundreds of threats including a warning of an attack on the venue using gasoline and fire, which reminded the staff of the horrible July 18 arson attack on an animation studio in Kyoto. So I understand the Triennale organizing committee’s concerns and fear,” Park told the Korea JoongAng Daily on Wednesday. “Still, I think it was a great mistake that the Triennale abruptly decided to scrap the exhibit, without sufficient discussions with the artists participating in the festival in advance. So, I cannot help thinking that they yielded to censorship. That’s why I closed my work’s exhibition.”

“But I don’t think other artists should follow my move,” he added. “They have their own ways of protest.”

Seventy-two artists participating in the Aichi Triennale from Japan, Korea and other countries, issued a statement in protest of censorship on Tuesday, calling for “the immediate restoration of the Aichi Triennale 2019’s autonomy from political pressure and intimidation, the continuation of the exhibition under the assurance of safety for all its staff and visitors, and the establishment of a platform for free and vigorous discussion that is open to all.”

Among the artists participating in the Triennale, Monica Mayer, a Mexican feminist artist and activist, uploaded the photos of herself and other people in the art world sitting next to an empty chair and wrote in Spanish, “Join the protest.”

She added “I think the image is very suitable to talk about women who were killed and disappeared in these parts of the world.”

According to Japanese media, several Japanese associations of art critics and writers, as well as civic groups, issued statements protesting the censorship and requesting the restoration of the exhibit for freedom of expression.

Still, adding to concerns, the city of Kobe canceled a symposium featuring Tsuda scheduled for Aug. 18, according to NHK.

The Japanese government has been sensitive to the “Statue of Peace,” since the sculpture - which memorializes former Korean sex slaves, euphemistically known as “comfort women” - was set up in front of the Japanese Embassy in central Seoul in 2011.

Still, Kim Seo-kyung and Kim Eun-sung, the sculptor couple who created the statue, have emphasized that it is not an anti-Japan piece of art, but a sculpture against the violence of war. They also created “Vietnamese Pieta” in 2016, as a symbol of atonement for the violence that Korean soldiers committed against Vietnamese civilians during the Vietnam War.

But some art critics have different views.

“The statue has been accepted as sheer anti-Japan nationalist propaganda, rather than an artwork with multiple meanings, in Korean society for years,” he continued. “Of course, in the contemporary art world, any object, including even religious icons, can be brought into the white cube of museums. However, in such cases, the objects’ initial functions or meanings are removed and they are put into a new context, so that they could be open to new and different interpretations. Did this de-contextualization and re-contextualization happen to the statue at the Aichi Triennale? I don’t think so.

“Because the statue entered into the white cube without its political context being removed, it aroused a political reaction, although I regret it ended with the stop of the exhibition amid the collision of both countries’ increasing nationalism.”

“Numerous historical examples show that, when commerce and nationalism are combined, it can easily fall into dangerous totalitarianism,” said Jung Keun-sik, professor of sociology at Seoul National University in an interview with JoongAng Ilbo on Aug. 20, 2017.

Choi Bum, an art and design critic, wrote an article in the web magazine Critic-Al on Aug. 15, 2017, saying that “The statue, although it is an artwork, has seldom been discussed seriously in the art world.”

According to Choi, mainstream conservative artists and critics, who emphasize the purity of art, take no interest in the statue, because they think it is too political. On the other hand, advocates of Minjung Art (People’s Art), which is defined by socialist realism art pieces protesting the Korean military regime of the 1960s to 80s and Western colonialism, support the statue, because they think “it is political and a representation of anti-Japan nationalism,” he said.

In his piece, Choi is critical of the statue’s qualities as a “nationalist symbol” and a “representation of the dichotomous view of the history.”

Taking on a new meaning

“But now I see the ‘Being a Statue of Non-Freedom of Expression’ movement on social media with great interest,” Choi told the Korea JoongAng Daily on Wednesday. “It is a new phase of understanding and interpretation of the statue.

“There is a theory called ‘reception aesthetics,’ which says the meaning of a literary text is made by the readers’ receptions or interpretations rather than the author’s intention. It also applies to visual art. Every art piece involves misunderstandings and sometimes creative misunderstandings.”

“Although the statue was received as a nationalist icon or of an anti-Japan icon by the general Korean public, the halting of the exhibit at Aichi Triennale is changing its meaning again. Its nationalist meaning is fading, as foreign artists receive it from the post-nationalist and global perspective as an art piece whose freedom of expression has been trampled. The ‘Being a Statue’ movement shared by artists from other countries is reinforcing that meaning.”

Given the circumstances, the Statue of Peace now seems to be coming into the multiple diverse contexts - a sculpture of anti-war and feminist messages, a nationalist icon and a symbol to advocate for freedom of expression.

“I see some tinge of hope, given that people in the art world from Korea, Japan and other countries are speaking together with one voice to protest censorship and advocate for human rights, beyond emotional nationalism,” said an artist who asked to remain anonymous. “That is the true role of art, I think.”