The future of cities is all about twinning

The future of cities is all about twinning 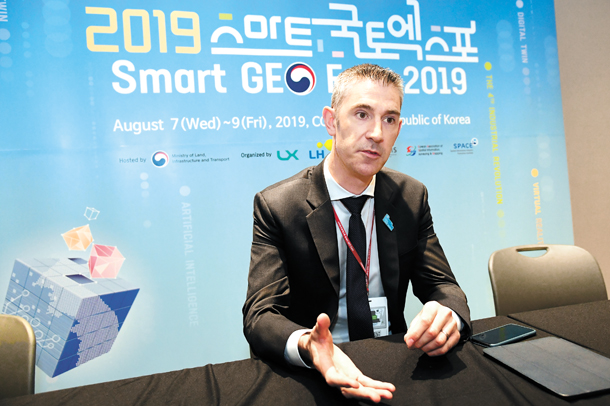 Richard Budden, smart cities lead at Esri for the Middle East and Africa, speaks about the future of urban planning through “digital twins” on Aug. 7 on the sidelines of the Smart Geo Expo in Coex, southern Seoul. [ESRI]

Smart cities are all the rage as governments are set to overhaul infrastructure using the latest technology, from the superfast 5G network to connected ride-sharing services.

Korea is determined to be at the front of the smart city race, with the Ministry of Land, Infrastructure and Transport announcing last year that it will invest 440 billion won ($363.5 million) into developing smart cities over the next 10 years.

U.S.-based company Esri believes that geographic information systems (GIS) will play a key role in developing and managing new and existing infrastructure as the technology unlocks many of the problems faced by urban environments by visualizing huge amounts of data through a “digital twin.”

The company, which produces GIS, has focused on creating digitalized copies of environments, which provide data with huge levels of detail - from the shadows cast by buildings to environmental analysis such as forecasting the direction and impact of flooding.

The Korea JoongAng Daily met with Richard Budden, business development manager at Esri and smart cities lead for the Middle East and Africa region, to discuss the potential of the technology in transforming the way cities are planned and managed.

“The amount of information we have now is vast […] nobody can catch up and control all of this. That’s where GIS can help,” said Budden on the sidelines of the Smart Geo Expo held in Coex, southern Seoul on Aug. 7.

“It lets us view information in a context instead of looking at data through tables and spreadsheets. If you apply GIS as a geographic frame to approach that data, things become clearer.”

Esri has already applied the technology to help develop a “digital twin” of Boston and San Francisco. The digital platform allows the city to predict and analyze the impact of new development projects by capturing the entire environment instead of simple traditional 3-D models or schematics.

The GIS expert compared the technology to the body’s nervous system.

“The human nervous system gathers information and processes it, enabling individuals to take appropriate action,” said Budden. “GIS is similar in that it captures information, analyzes it […] and gains insight into taking action.”

He explained that the technology can help both existing and new cities.

“London has challenges with the Victorian drainage systems. It’s just not able to cope with the capacity of the urban population of today. GIS is helping that by planning new infrastructure and where [it] can be placed.”

Budden, who is based in Dubai, explained that the technology has already been implemented in cities across the Middle East.

“In Saudi Arabia, they are building brand new cities from scratch, and they are using GIS as a foundational capability to understand where things should be, what sort of infrastructure they need and what types of opportunities there are.”

“Many governments in our region are traditionally heavily reliant on oil, so they are focused on generating new sources of income,” said Budden. “Smart cities is one way to progress to attract overseas investment or become a tourist hub.”

GIS can also help in terms of public safety.

“We had the Winter Olympics in Korea last year […] GIS allows planning for the large amount of people such as identifying where certain locations need to be reserved for safety and how you plan the movement of people,” explained Budden. “Getting people to stadiums, closing roads, dedicate lanes to people - all that information is accessed through GIS.”

Budden added that the hype around smart cities is ultimately not just about incorporating cutting-edge technology but about inherently raising the quality of life of inhabitants.

Esri is currently working with regional governments in Korea to apply GIS to existing infrastructure such as water systems in Incheon. It has also showcased how its technology can monitor the flow of fine dust.

Korea has yet to apply GIS and “digital twin” technology on a large scale, although early efforts have begun. State-backed geographic information company LX created a “digital twin” of a neighborhood in Jeonju, North Jeolla, earlier this year.