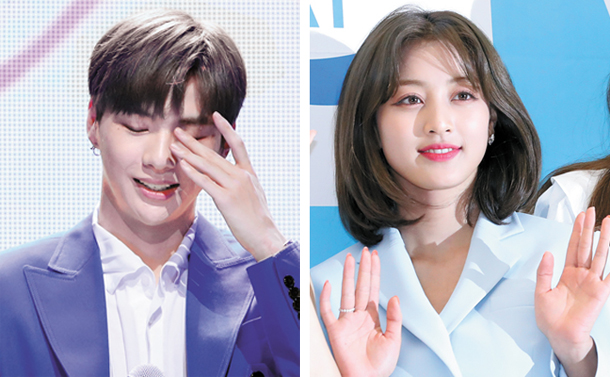 In a statement to fans last week, singer Kang Daniel took a somber tone, saying, “I’m sorry to all of you who must have been taken by surprise by the sudden news.”

What required an apology? Dating.

While the dating lives of singers in the West are usually treated with interest or even indifference, fans of K-pop readily share their disappointment in artists who are revealed to be in a relationship. It is not unheard of for fans to abandon their favorite singers after relationship rumors start to spread.

Kang and Jihyo admitted they were dating last Monday, after local entertainment news outlet Dispatch reported the news on Monday morning. Fans from both sides took to social media to express their anger, especially focused at Kang, who had just recently made his solo debut. Kang dropped his first EP “Color On Me” on July 25, and sold 460,000 copies of the album within the first week - a record for a solo debut. The news of his successful debut was sullied by the dating revelations, and many of Kang’s fans were enraged.

A fan, who asked not to be named, said, “I feel betrayed, because I and the other fans bought hundreds of albums to make sure that his album sales were high. I myself spent 2 million won, but I know someone who spent 5 million won.”

Other fans took to social media to say that they were planning to sell their Kang Daniel albums, post cards and other official merchandise with the singer’s face and name on them.

Jihyo’s fans were relatively calm, but her agency JYP Entertainment’s Kosdaq shares fell by 12.13 percent on Monday, closing at 17,750 won. It recovered slightly, closing at 17,850 won on Wednesday.

Unexpected damage was also inflicted on singer Lim Seul-ong’s Instagram that night as well. When people found out that Lim introduced Jihyo to Kang as a mutual acquaintance, fans started bombarding him on social media, leaving comments like “Are you crazy? Why did you do it?,” “Don’t meddle with other people’s lives, you idiot!” and “What are you going to do now? Take responsibility!”

On Monday night, Kang uploaded a letter of apology on his official fan club website.

“So many things happened during the time that led me to standing on my own, as I do now. There were times when I was just so exhausted, but it is you, the fans, and no one else, that helped me get back up in those times,” he wrote. He did not, however, mention the fact he was in a relationship or how he came to meet her.

This is not the first time that a celebrity has openly apologized for having a love life. Singer Baekhyun of boy band Exo posted an apology in July 2014 on his Instagram, after it was reported that he was dating singer Taeyeon from Girls’ Generation saying, “I am sorry for fans who may be disappointed and hurt by me.”

In July, singer Kim Kyu-jong of SS501 apologized to his fans “for startling and upsetting” them, after he accidentally posted a picture of himself and his girlfriend on Instagram. In March 2018, Baro of boy band B1A4 even apologized for having “dating rumors” that were not even true. The list goes on.

“Fans showed different reactions to the news, and the letter was a means for [Kang] to get across how he feels to his fans. It was meant to help calm the startled fans, as a part of his communication efforts with fans,” Konnect Entertainment said.

“In America, celebrity dating actually tends to be quite an exciting news story, rather than a controversial one, with many people watching with a lot of curiosity and anticipation over these couples,” said American K-pop columnist Jeff Benjamin. “In fact, there are reports that celebrity couples have been manufactured by record labels and management teams to help create mutual buzz and interest for their artists. Some celebrity relationships have even defined certain artists and lifted them to new heights […] There seems to be a different understanding in how these relationships are viewed and, instead, it tends to be ultimately mutually beneficial for U.S. and western celebrities.”

According to Jenna Gibson, a PhD student at the University of Chicago and a columnist for The Diplomat, the difference arises from how fandom culture is formed in the first place. While K-pop companies and agencies encourage tight relationships between the stars and the fans, that tight bond becomes the very reason why fans feel a sense of betrayal when their favorite stars are found to be in a dating relationship.

“There is so much content and events for fans to enjoy from a K-pop artist, like music shows, V-Live, social media and so on,” she said. “That’s great, building up a relationship between the fans and artists as if there is something special between them. But because they support them so much and devote so much of their time and money to their artists, it’s inevitable that they feel like they want to be reciprocated and even feel like they have some kind of control over their idols.”

She added, “It’s also rare for western fans to have one particular group they like. So in Korea, you’re either a fan of this group or that group, but if there’s a western K-pop fan, they would just be a fan of K-pop as a whole.”

The tendency for fans to get somewhat carried away in protecting their favorite groups also derives from what fans call yusa yeonae, or, “pseudo-romance.” There are two major types of intimacy that fans tend to have with their favorite stars: pseudo-romance and pseudo-childcare.

While some fans idealize their stars as they would with someone they have an actual crush on, others are more focused on raising them to become bigger stars, as if raising children.

Professor Lee Gyu-tag, who teaches in the cultural studies department at Mason Korea explained that while a pseudo-romantic affection by fans sounds different from actually viewing stars as potential lovers, at heart it isn’t.

“Calling their emotions a pseudo-romance may be because in that way, they can justify their emotions without feeling guilty of viewing them as sexual subjects,” he said. “But this isn’t something that happens with all Korean fans of music - it’s strictly limited to fans of idol groups. If Korean rock stars or rappers are dating anyone, their fans don’t [tend to] turn their backs on them. K-pop fans want to feel like the stars are close and intimate to them, and expect that friendly image from them. And by making an image of being that friendly figure, stars fulfill their fans’ demands.”

He added, “There is a change among the fans. They may not be mainstream, but more fans are saying that they’re only human begins. In the past if a celebrity was caught dating, that was the end of their career, but now there are fans that actually support them.”

To those fans who still struggle to tell themselves that it is okay for stars to date someone else, columnist Benjamin wants to remind you of why you fell in love with them.

“While I do understand the mindset and personally feel it’s more beneficial for new artists to remain out of relationships no matter where in the world you are, I don’t think it should be reason enough for fans to not support an artist. Whether in or out of a relationship, they are still the same artist who comforted you, excited you and touched your heart - and that is why you supported them in the first place, not because of their relationship status.”