Hyundai Motor’s fuel-cell electric vehicle Nexo was named one of the safest cars in the United States.

Hyundai said in a statement Sunday that the Nexo received the highest rating of Top Safety Pick Plus from a recent safety test run by the Insurance Institute for Highway Safety (IIHS). 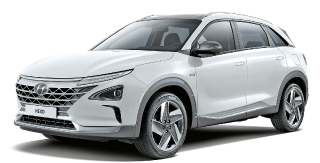 The IIHS only evaluated Nexo vehicles made after June this year, which is when Hyundai Motor adjusted the headlights to improve visibility through curves.

The Nexo was picked as one of just six midsize luxury sport utility vehicles (SUV) to receive the highest rating, along with the BMW X3, BMW X5, Acura RDX, Mercedes-Benz GLC and Mercedes-Benz GLE.

The Korean SUV was already highly rated by Korean and European agencies for safety last year.