Kolmar Korea founder and Chairman Yoon Dong-han resigned from top management on Sunday after facing a backlash for making hundreds of employees watch a YouTube video criticizing the government’s stance against Japan.

Kolmar is a leading beauty and skincare manufacturer that supplies many of the top Korean brands including Amorepacific, Missha and AHC, as well as leading foreign companies. Its 71-year-old chairman came under scrutiny after news spread that he played a rightist YouTube video in a monthly staff assembly held last Wednesday. The meeting was attended by more than 700 employees. 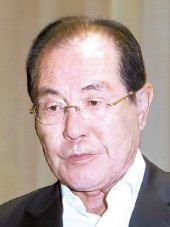 “I deeply apologize for sparking controversy with a video played on Aug. 7 for reference during an internal assembly,” he said in an emergency press event held Sunday at Kolmar’s research center in Seocho-gu, southern Seoul.

“In deep regret, I am stepping down from management to take responsibility as the situation was the result of my own inadequacy.”

Made by a conservative YouTuber, the video in question focused on Korea’s recent exemption from Japan’s “white list” of countries that receive preferential treatment on export processes. It included swear words and sarcastic comments against the government and the ongoing boycott against Japanese products.

The incident was made public after an employee uploaded a post on an anonymous forum, adding that Yoon had told staff “let’s each think about the video.”

Comments in the video that were particularly outrageous included praise for Japanese Prime Minister Shinzo Abe as a “great leader for not punching Moon Jae-in in the face” and predictions that Korea’s economy would go downhill soon, like Venezuela where “women prostitute themselves for seven dollars.”

In an apology released Friday, the company explained that only a part of the video was played.

Yoon currently holds a 28 percent stake in Kolmar Korea Holdings and his son Yoon Sang-hyun is the CEO.