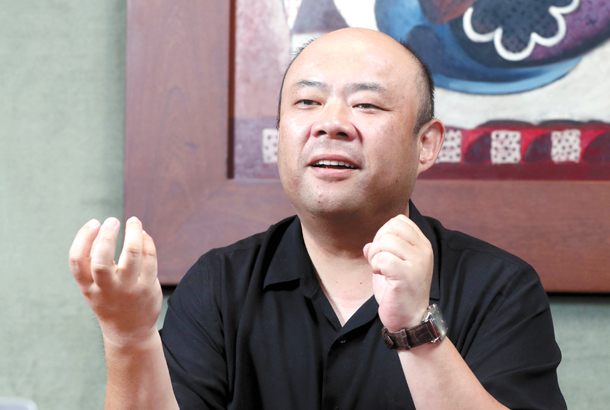 The move marks the second investment Son has made in a Korean company, after investing in education-focused social platform Classting last year.

In an exclusive interview with the JoongAng Ilbo on Aug. 6, Son emphasized his support for the social values pursued by 00ground.

“00ground seeks impact investment never seen before in the global real estate industry,” said Son, referring to investments that also seek social and environmental benefits. “I decided to hand in my support to the cause to buy real estate that has historic, social and cultural significance and aims to create social value.”

00ground has also attracted other high-profile investors such as Lee Jae-woong, founder of internet portal website Daum. The company last year purchased the headquarters of celebrated monthly publication Samtoh and established a start-up accelerator for companies focusing on education and media. 00ground is currently preparing for its second real estate investment.

Son, an ethnic Korean from Japan, shot to fame after founding major online gaming company GungHo in 2002 and has accumulated 2 trillion won ($1.65 billion) in assets. He established Mistletoe in 2013 with his own personal funds and has since focused on investing in start-ups across the world. The venture capital firm is notorious for investing in start-ups that take on the gravest challenges. For example, it has invested in a company that delivers medical supplies through drones in Africa. Mistletoe has already invested over 200 billion won in around 120 companies.

Q. What led you to invest in 00ground?

A. I was always interested in conserving buildings that have social and cultural value. I thought that it was extremely meaningful that 00ground preserves such buildings and recreates them as spaces for start-ups. It is a common problem in Asia that old buildings are easily demolished and replaced with new concrete structures. But concrete buildings don’t last for a century.

Structures built with past technology are disappearing. That scarcity will increase the value of the building. Furthermore, we will search for a space with 00ground for “Vivistop,” an innovative space for children, to be officially opened next year in Seoul.

It’s a space for children operated by Vivita, an education technology company I founded. Children can make whatever they want and do experiments. There are no teachers, no curriculum. I believe that children are more creative than adults. We will temporarily operate in Seoul from Aug. 6 for one month, following opening in Japan, Estonia and Singapore.

We have a motto to never plan for anything, but we are planning for an official opening at the Seoul branch in the second quarter of next year. In line with [our message to] prevent education from becoming a mandatory service, it will be provided for free.

Is it possible to create a space for children without a specific plan and for free?

If someone makes a plan, everyone follows the plan. You ultimately lose serendipitous moments. For example, if you are going on a picnic, you should be more conscious about the numerous possibilities on the way to the picnic rather than focusing on arriving at the picnic.

Vivistop is free because we don’t want to operate by demonstrating what has been taught in a planned curriculum for compensation. We want children to grow by themselves. We want to give them the happiness to create something by planning on their own and the confidence to change the world.

We have a sustainable profit model. If children make creative products, we will commercialize them and distribute profit. We had a toy design workshop at a Vivistop in Japan and there were many great ideas. Children can become designers that make good products.

Why the emphasis on autonomy?

We are currently designing and researching a new 21st-century city [model] through a diverse group of people. The keyword is “human autonomy.”

Today’s cities are designed based on the industrial revolution. As there is an overreliance on the existing massive production system, humans are now unable to create even a single piece of clothing. However, if we have a sewing machine equipped with artificial intelligence in the future, anyone can make their own clothing.

There needs to be a transition to a new era. We want to develop the concept of autonomy to children through Vivistop. Instead of spoon-fed teaching methods, human creativity will be the most import thing in an era of artificial intelligence.

There are a lot of rich people but few good investors. What led you to this path?

After I stepped down as chairman at GungHo in 2016, I observed society for three years, and a lot of my ideas changed. I had lived life at the fastest speed, but I now feel like that speed has become poison. We are in an era that requires calmer, deeper thinking.

People think that investments that result in a positive social influence have a lower rate of return than conventional investment.

I wanted to prove this wasn’t so.

How can we solve the current breakdown in Korea-Japan relations?

Questions are more important than answers. If we ask questions that cut to the core, we can arrive at a solution by ourselves in the process. What is the most ideal relationship between Korea and Japan? Why has such a conflict happened? I hope that the media in both countries avoids one-sided and provocative reporting.