U.S. President Donald Trump on Friday called on Korea and Japan to resolve their diplomatic differences, saying their dispute was putting the United States in a “bad position.”

“South Korea and Japan are fighting all the time. They’ve got to get along because it puts us in a very bad position,” Trump told reporters at the White House. “They’re supposed to be allies.” 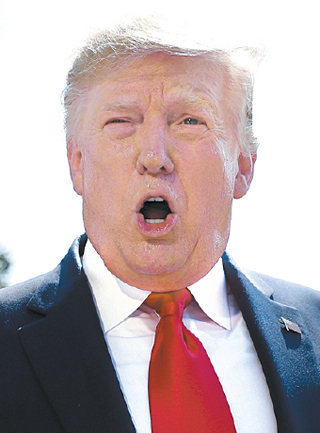 Trump’s remarks follow a visit by his new Pentagon chief, Defense Secretary Mark Esper, to East Asia, where he told his counterparts in both Seoul and Tokyo of the importance of security cooperation amid growing concerns about China and North Korea.

In a meeting with Korea’s Minister of National Defense Jeong Kyeong-doo, Esper stressed the role that the General Security of Military Information Agreement (Gsomia) plays in the two countries’ trilateral security partnership with Washington, discouraging South Korea from with drawing from the intelligence sharing pact with Tokyo.

As a response to Japan’s economic retaliations, Seoul is considering whether to renew the bilateral Gsomia once it expires later this year. Signed by the two countries in November 2016, the pact is renewed automatically each year unless either side wants to scrap it, in which case it must inform the other 90 days in advance. The deadline to raise an objection for this year is Aug. 24.

Top ruling party lawmakers in Korea have openly called for the government to end its agreement with Japan, and Chung Eui-yong, director of the Blue House National Security Office, told a parliamentary committee last Tuesday that Seoul was questioning whether it was appropriate for “countries with mutually contradictory positions to continue sharing sensitive military information.”

In response, Tokyo appears to be trying to get the United States on its side in the dispute with Korea.

Quoting a government official, the Japanese daily Mainichi Shimbun reported Sunday that Japan’s Foreign Ministry allegedly received a statement from the U.S. State Department that expressed support for its argument that all issues relating to reparations - including that related to the Koreans forced into slave labor by Japan - had been resolved under a 1965 treaty between Korea and Japan.

Tokyo has continuously argued that the 1965 pact with Seoul, which normalized relations between the two countries in return for Japan providing Korea with a lump sum settlement, completely resolved any compensation issues stemming from Japan’s colonial rule from 1910 to 1945.

Yet a Korean Supreme Court ruling last year that ordered Japanese companies to compensate Korean victims of forced labor, as well as Seoul’s scrapping of a fund established by the comfort women deal, led Japan to issue a series of economic retaliations against Korea last month, which included export restrictions on key industrial materials.

The Mainichi report claimed that the United States’ support for Japan’s argument with regards to the 1965 treaty was based on a concern that if it did otherwise, compensation settlements contained in Washington’s 1951 San Francisco Treaty with Japan would be at risk.

The report further suggested the U.S. government may be concerned that the Korean precedent could encourage former American prisoners of war forced into wartime slave labor during World War II to again seek reparations from Japan after similar cases were dropped in U.S. courts in the early 2000s due to the legal clauses contained in the San Francisco Treaty.

In Korea, Japan’s decision to hit back on these historic issues through economic measures has incited a wave of nationalist sentiment that is reaching a fever pitch as the anniversary of Korea’s liberation from Japanese rule nears. On Saturday, around 15,000 people gathered in sweltering heat near the former Japanese embassy building in central Seoul to protest against the Shinzo Abe government’s economic retaliations.

In his public address on Liberation Day this Thursday, Korean President Moon Jae-in is expected to deliver a strong message to Tokyo, though there is some speculation that he will use the opportunity to make a conciliatory gesture to resolve the rift.