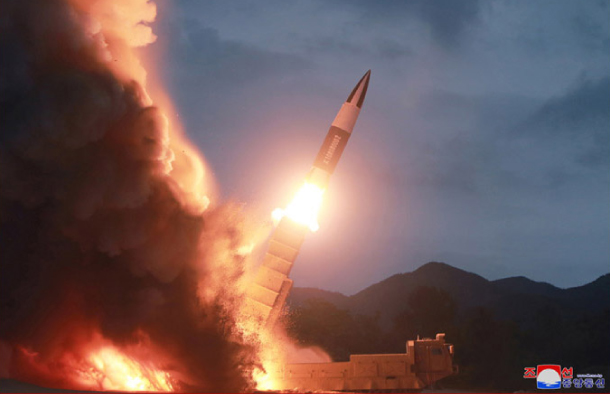 North Korea on Saturday conducted its seventh weapons test this year, firing two unidentified projectiles into the East Sea, on the same day that U.S. President Donald Trump received a letter from its leader Kim Jong-un apologizing for those very same launches.

The rockets, which South Korea’s Joint Chiefs of Staff (JCS) said appeared to be short-range ballistic missiles, were fired at 5:34 a.m. and 5:50 a.m. from an area near Hamhung, South Hamgyong Province. Each flew around 400 kilometers (249 miles) with peak altitudes of 48 kilometers at over Mach 6.1, the JCS said.

An English language report on the launch from North Korean state media on Sunday provided little information on the projectiles other than that they were a “new weapon which was developed to suit the terrain condition of our country” and had a “tactical character different to the existing weapons systems.”

With Seoul and Washington in the middle of conducting combined military exercises, the South’s JCS said the North Koreans are also conducting their own summertime drills and may very likely launch further missiles in the days to come. The allies’ command post exercise kicked off on Sunday and is scheduled to continue until Aug. 20.

The South’s Blue House said it concluded the North’s latest test was a military provocation meant to protest the drills, just as it had done four days earlier with a test last Tuesday and three more launches in earlier weeks.

This intent was apparently also made clear in the letter sent to Trump, which the U.S. president tweeted Saturday expressed Kim’s interest in meeting to restart denuclearization negotiations once the joint exercises are concluded.

“It was a long letter, much of it complaining about the ridiculous and expensive exercises,” Trump wrote. “It was also a small apology for testing the short range missiles, and that this testing would stop when the exercises end.”

Trump added that he looked forward to seeing Kim in the “not too distant future,” and that a “nuclear-free North Korea” would be one of the most successful countries in the world.

The president told reporters at the White House Friday that he had received a “very positive” missive from Kim, which he said was “three pages, right from top to bottom, a really beautiful letter.”

In his brief tweets, Trump appeared to concur with the North Korean leader in calling the military drills “ridiculous and expensive” - words he also used to describe the exercises after his first summit with Kim in June last year when he shocked Seoul by saying he would suspend joint “war games” with South Korea.

Washington ultimately did not abolish the drills, but it did agree with Seoul to scale down the major summertime exercises to a computerized command post exercise. On Sunday, the allies began the new drills with a South Korean general in charge for the first time, in order to test Seoul’s initial operational capacity for an envisioned transfer of wartime operational control.

To avoid provoking the North, the allies even chose to scrap the name Dong Maeng, or alliance, for the exercise, which they stressed was purely defensive in nature.

These changes, however, apparently did little to mollify Pyongyang.

Almost immediately after conducting its launches Saturday, the North’s KCNA released an editorial slamming the South for being the “harasser of peace and stability” on the peninsula with its drills and introduction of new equipment to its defensive arsenal.

“All the facts prove that the South Korean authorities hell-bent on arms buildup against the dialogue partner are the arch criminals escalating tension in the Korean peninsula and wreckers of its peace and stability,” the article read.

A top official from Pyongyang’s Foreign Ministry, director-general of the Department of American Affairs Kwon Jong-gun, also released a statement to KCNA on Sunday ruling out inter-Korean contact until Seoul made a “plausible excuse or explanation in a sincere manner for conducting the military exercise.”

If Kim’s missive to Trump is to be believed, remonstrations about the joint drills could be intended to justify the North’s weapons tests before talks with Washington resume, potentially when the military exercise finishes at the end of this month.

Photographs from the weapons test released by KCNA on Sunday showed a rocket being launched from a transporter erector launcher (TEL) with a different exterior paint job from the missile fired last Tuesday or the rocket artillery the regime said it tested on July 31 and August 2.

Yet the speed and distance covered by the latest projectiles, experts say, make it likely they were short-range ballistic missiles, though perhaps not the same Russian-made Iskander variants from earlier tests.

According to Kim Dong-yub, director of research at Kyungnam University’s Institute for Far Eastern Studies, the diverse ranges, shortened launch times and mobility of the launch unit in the TELs suggest the North may be trying to raise its capacity to deter the United States and South Korean military through just conventional - and not nuclear - weapons.