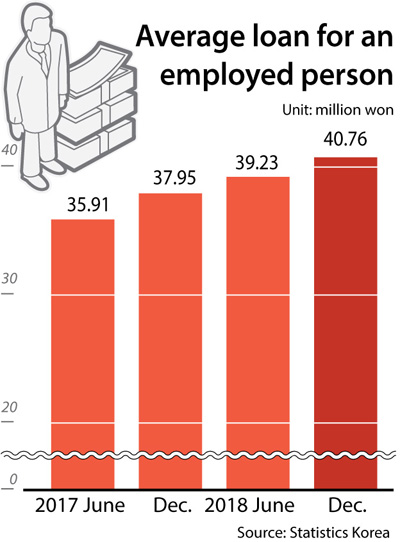 The figure does not include people that are self-employed or are paid on a day-to-day basis.

The late payment ratio on loans borrowed from banks and nonbanking financial institutions like savings bank cooperatives also increased by 0.05 percentage points over the same period to 0.56 percent.

The study has found that the people that borrowed the most were those in their 40s working at conglomerates with relatively higher salaries. The purpose of the loans is believed to be mostly for purchasing housing. Younger lenders, however, are more likely to be borrowing for other reasons such as paying off their student loans.

The overdue payment ratio of men was also higher, at 0.61 percent, while form women it was at 0.44 percent.

Young people in their 20s or younger had the smallest accumulated loans, at 10.93 million won.

However, the more the person made, the lower their overdue payments were.

The biggest concern, however, is the rapid rise of loans borrowed by younger people, especially from nonbanking financial institutions with higher interest rates.

The overdue ratio of loans borrowed from banks is only at 0.22 percent, while those borrowed from other financial institutions totals 1.15 percent.