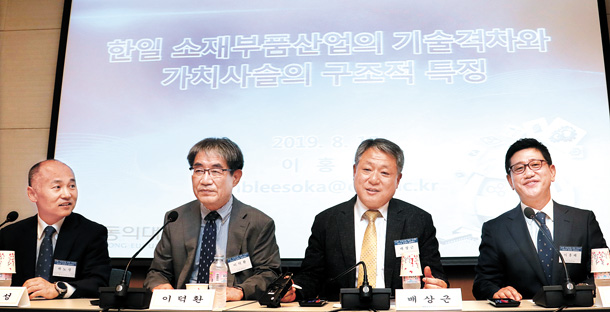 Experts discuss the technological gap in parts and materials business between Korea and Japan and the ways to improve the disparity during a seminar hosted by Korea Economic Research Institute in Yeouido, western Seoul, on Monday. [YONHAP]

Chemistry and trade experts called on the government to undertake more research on the impact of Japan’s export restrictions.

At the heart of the discussion is whether - or how - the country should localize the production of key industrial parts and materials, instead of being reliant on Japanese producers.

Lee Duck-hwan, professor emeritus of chemistry and science communication, said that as much as localization might be needed, the current proposals lack feasibility and a long-term view.

“It is impossible to completely switch to the local production of all essential materials as the country is poor in natural resources,” Lee said during a seminar hosted by Korea Economic Research Institute (KERI).

“So, the government needs to select a set of materials, but the task itself requires expertise and voices from the industry.”

The professor noted that the government has failed to take such steps and merely referred to a list of basic materials provided by the Korea International Trade Association (KITA).

In selecting the materials to be locally produced, the top criterion should be marketability, according to Lee.

“We need to carefully study whether the material could be exported to other countries and will be in demand overseas to not waste the government investment,” the professor said.

Materials being restricted by Japan so far include fluorinated polyimides, used in smartphone displays, and photoresists and hydrogen fluoride, two key materials used to make semiconductors

Lee Hong-bae, an international trade professor at Dong-Eui University, said that the government’s efforts should be geared towards facilitating cooperation with overseas producers to enhance competitiveness of the country’s parts and materials business.

“Big companies already belong to a global network,” the professor said, “But smaller players find it hard to produce key materials because of shortages in resources and capital.

“So, the government should step in to help find partners in the areas of technology, production and investment.”

Professor Lee also outlined his research delving into the gap in the technological state of the parts and materials industries in Japan and Korea.

The research found that the technological gap between Japan and Korea in parts and materials has been narrowed down substantially from the 1980s to 2015.

Even if local companies try to develop many key materials, draconian regulations will hamper the endeavor, according to Kwak No-seong, a professor of science and technology policy at Hanyang University.

“The country’s regulations on registration and management of chemical materials are comparable or stricter than in the EU, a bloc that has stronger regulations than the United States and Japan,” Kwak said.

“Therefore, the country’s small and medium companies almost give up on such development due to tight rules. So we should ease the regulations to a level comparable with Japan,” he said.