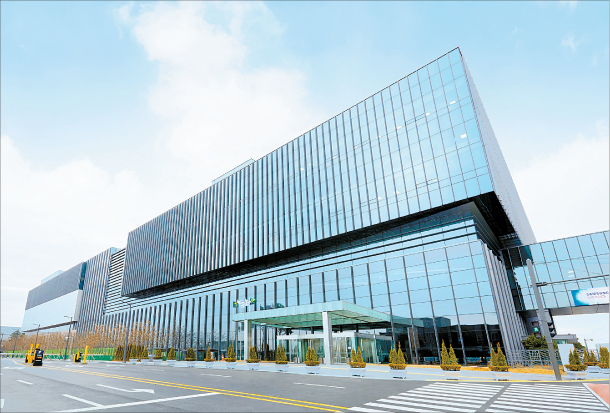 A view of the Samsung BioLogics’ factory in Songdo, Incheon, that opened its doors in October last year. Thanks to the “N-1 Perfusion” technology, the bio manufacturing plant can now cut production time by up to 30 percent. [SAMSUNG BIOLOGICS]

Samsung BioLogics has applied a new cell cultivation system that could reduce cell production time for its clients by up to 30 percent, paving the way for the company to attract more commercial production opportunities.

The biopharmaceutical company announced in a statement Monday that it started applying the “N-1 Perfusion” technology in its third factory in July.

The bio manufacturing plant in Songdo, Incheon, which commenced operations in October last year, is now capable of cutting production time by up to 30 percent and allows its customers more choice in choosing manufacturing options.

While the company and its subsidiary Samsung Bioepis became known for making biosimilars, Samsung BioLogics has also been focusing on the contract manufacturing business of fulfilling production orders from other pharmaceutical companies.

The traditional cultivation system had its limits in growing cells due to the accumulation of waste during the growth process. By using a specialized filter attached to cultivating batches, the N-1 Perfusion system can filter and separate the waste from growing cells without contaminating the batch and gives more room for multiplication.

The Samsung Group affiliate said the new system could be applied in cultivating around 3,000 liters of cells.

“We already had the technology in the pipeline as we started developing the new system since last year,” the spokesperson said. “Our third factory was precisely constructed to use the N-1 Perfusion system.”

The mass-scale application of N-1 Perfusion technology signals that Samsung BioLogics could fulfill more diversified orders in different volumes for its clients.

Bio manufacturing plants already in operation for most biopharmaceutical companies are not capable of applying the N-1 Perfusion system even if developed, as the technology requires a whole new set of infrastructure and facilities.

For that reason, Samsung BioLogics believes the company will now be more appealing to potential partners as it should be more able to fulfill orders of varying volumes and deadlines.

With the news of the successful application of the N-1 Perfusion technology, Samsung BioLogics’ share price jumped up 7.24 percent to 289,000 won ($237) by Monday’s close.