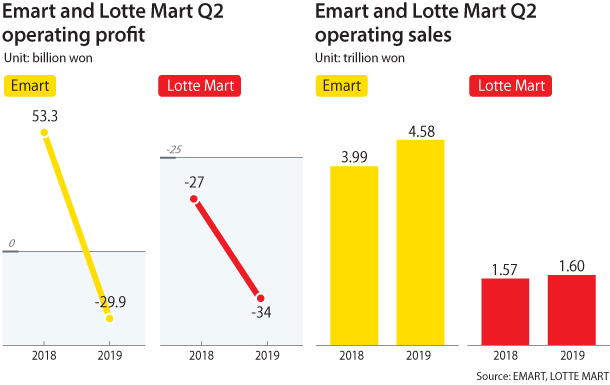 After posting operating losses in the second quarter, Lotte Mart and Emart announced a slew of new measures to keep their businesses competitive in the cut-throat retail market.

Lotte Mart and Emart on Monday announced measures to make up for their second quarter operating losses that went public on Friday.

Their poor performance didn’t come as a huge surprise, as both companies pay property tax in the second quarter. The intensified competition and the growing tendency to shop online also weighed in on the outlook, but industry insiders argue that the operating loss of the two retailers is far larger than expected.

Emart vowed to partially shut down stores of poor-performing brands like its health and beauty brand Boots while investing further in profitable businesses, including Electro Mart, its electronics chain, and its own-brand range No Brand. Lotte Mart said it will reduce the number of private brands in its stores to solidify selected brands’ growth.

In their preliminary reports, Emart and Lotte Mart posted significant operating losses in the second quarter. Emart posted a 29.9 billion won ($27 million) operating loss, down from a 53.3 billion won gain in the same period a year ago. It was the first time that Emart has recorded a quarterly operating loss since the company was established in 1993. Its sales, however, improved from 3.99 trillion won last year to 4.58 trillion won this year.

To combat the loss, Emart said it will expand its dawn-delivery service to strengthen its online business, which it argues will become possible with the opening of a third distribution center by the end of this year. The retailer also vowed to reinforce the delivery of fresh produce and to expand its home meal replacement range.

Emart also hopes to appeal to customers in their 20s and 30s by introducing Electro Mart in more of its stores to offer more experiences. Electro Mart stores include gaming and virtual reality zones where customers can try out new products.

Lotte Mart said it will drop some of its brands from 38 to just 10 to solidify the image of the selected brands.

The retailer also plans to increase the number of automated self-service marts in the second half of this year. It currently has 20 such stores. Lotte also hopes to appeal to younger customers by offering more experiences like sports parks and filling stores with brands popular among younger customers.

“With the continuous dwindling of their market competitiveness, it would be [wise] for retailers to cut down on their general cost structure,” said analyst Lee Ji-young from NH Investment & Securities.