LG Electronics’ new dual screen phone will come with a hinge that can be left open at any degree and a small screen on the outside of the second optional screen.

Hints about the new phone came in a 15-second video teaser uploaded on YouTube Sunday, which started with a clock hand rotating in a half-circle, passing marks for 0 degrees, 108 degrees and ending at 180 degrees. In a statement, LG said this referred to the three degrees its previous dual screen frame could be fixed at.

For the V50 ThinQ released earlier this year, LG Electronics opted for a secondary detachable 6.2-inch screen rather than a foldable screen. The second screen is an optional accessory.

The new model will have a so-called free-stop hinge that allows more flexibility. The adjacent screens can be fixed at any angle between being completely folded and open flat, like laptops. 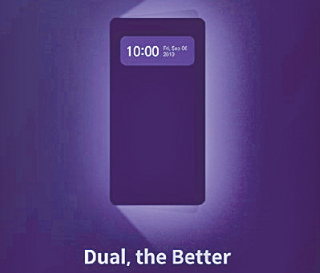 The teaser also showed that the new optional screen will come with a small, rectangular screen on the outside when it is attached to the main phone and folded shut, big enough to show app notices and the date.

LG’s dual screen phone does not combine two screens in one device. The experience is more like using two different displays that open like a book.

The optional accessory for the V50 ThinQ was originally priced at 219,000 won ($180) but is offered for free to customers who purchase the smartphone before the end of this month.

For the new model, the second dual screen will also be an attachable, optional accessory.

Another video teaser released last week hinted that the new version will allow the displays to work together with one app running across both.

The new dual screen phone will be unveiled at the IFA 2019 Berlin, Germany, on Sept. 6. A day before the electronics exhibition begins, LG will unveil the phone to global media at the Pullman Hotel Berlin Schweizerhof.