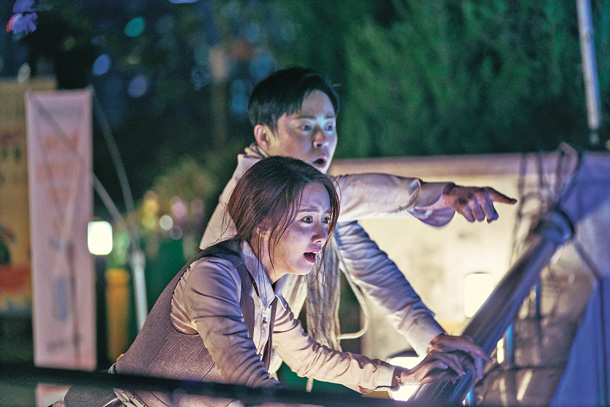 ‘Exit’ holds on to the No. 1 spot for the weekend’s box office. The local film, only in its second week in theaters, has already sold over 5.7 million tickets. [CJ ENTERTAINMENT]

After a summer of big-name foreign hits, local films continued to prevail at the box office for the second week in a row.

“Exit” remained at the top spot after attracting over 1.45 million moviegoers at 1,465 screens, according to Korean Film Council. Word-of-mouth helped the movie despite its unusual genre. The film is a comedy about surviving a catastrophe. Actors Cho Jung-seok and Lim Yoon-a have been praised for their performances.

In between the laughs, the film also touches on current social issues, such as the unemployment struggles that many people in their 20s face. The overarching theme of familial love seems to have connected with audiences.

“The Battle: Roar to Victory” finished its debut weekend in a close second, with 1.4 million tickets sold at 1,476 screens. 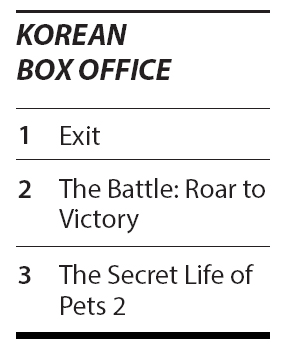 When the March 1 Independence Movement fuels the nation’s desire for liberation from Japan, the Korean Independence Army forms a plan to fight and defeat Japanese forces in Manchuria, China by luring the soldiers out to the so-called valley of death, or “Bongo-dong.” Although the militia is fighting a losing battle as they are lacking both in size and weapons compared to Japan, the Army still believes they have a fighting chance if they use the geography of the valley to their advantage, something that their enemy isn’t aware of.

Based on the Bongo-dong battle in June 1920, the film depicts the first recorded victory by the Independence Army.

The second round of animal adventures in “The Secret Life of Pets 2” fueled the film to third place for the weekend with an estimated 128,000 moviegoers coming out to theaters to watch the film, which played at 611 screens.

A documentary about the K-pop global superstars BTS “Bring the Soul: The Movie” finished in fourth place on its first week, selling about 116,000 tickets through 515 screens. The film takes place in Paris, after the septet’s final stop on their recent world tour. The day after the grand finale, the members gather at a small rooftop restaurant for an after-party to congratulate themselves. The group’s dedicated fans, known as ARMY, are able to learn about how the members are feeling after the tour and see special behind-the-stage moments.

“The Divine Fury” dropped down several places to the fifth spot, selling 114,000 tickets at 625 screens. Despite big-name actors Park Seo-jun and Ahn Sung-ki, the occult story seems to have failed to capture the interest of audiences, resulting in a major fall at the box office ranks.

Despite the current reign of local films, however, data from the Korean Film Council shows that the summer box office is not doing as well as it was expected to. From July 19 to Aug. 10, approximately 19.2 million moviegoers visited cinemas across the country, while 25 million tickets were sold during the same period last year.

Based on a survey, a person in Korea sees an average of 4.2 films per year. Analysts point out that the public feels that they have already seen all the must-see films, with “The Extreme Job,” “Avengers: Endgame,” “Aladdin” and “Parasite” all having exceeded the 10-million-ticket-sales mark.

The organization also pointed to the possibility of no local films surpassing the 10-million-milestone for the rest of the year.

“People in their 40s and 50s have already seen the talked-about films such as ‘Parasite,’” a representative said. “There seems to be lack of motivation for people that age to visit theaters again.”