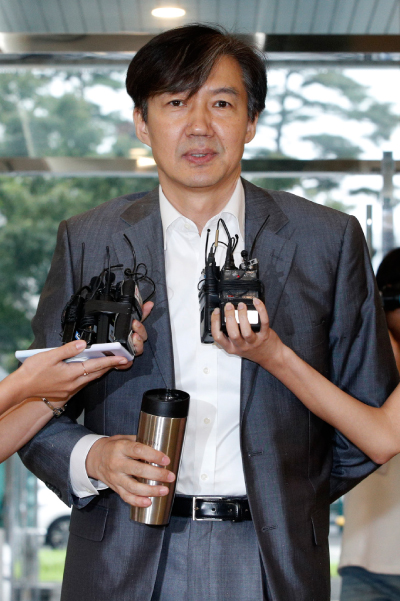 Ahead of the confirmation hearings of President Moon Jae-in’s new minister nominees, lawmakers on Monday questioned the suitability of Cho Kuk to head the Ministry of Justice, citing his past membership of an anti-state organization.

At the Supreme Council meeting of the main opposition Liberty Korea Party (LKP), Chairman Hwang Kyo-ahn said Monday that Cho is unfit to serve as the justice minister because of his National Security Act conviction.

In 1993, while serving as an associate professor of law at Ulsan University, Cho was convicted of violating the National Security Law for his involvement in the South Korean Socialist Workers’ Alliance. He was detained for six months during the probe and sentenced to a two-and-a-half-year suspended prison term.

“The Socialist Workers’ Alliance was an anti-state organization with an aim to accomplish a socialist revolution with armed rebellions,” Hwang said. “It produced explosives, created a plan to steal weapons and made poison capsules for suicide.”

During Cho’s detention, Amnesty International designated him as a prisoner of conscience. He was pardoned of the conviction in 1994.

On Friday, Moon nominated Cho, his former senior secretary for civil affairs, as the minister of justice, asking him to complete the administration’s initiatives to reform law enforcement authorities, particularly the prosecution. Opposition politicians, however, vowed to lay bare how unfit Cho is for the position at the upcoming confirmation hearing, although the process is non-binding.

Cho is Moon’s trusted partner in the ambitious project to overhaul the criminal justice system to make it less political. Shortly after he took office in May 2017, Moon named Cho, a progressive law professor at Seoul National University and a strenuous critic of the criminal justice system, as his senior civil affairs secretary, a powerful post that supervises the prosecution, police and the National Intelligence Service (NIS).

Cho resigned from the post last month. Only after two weeks, Moon nominated him as the new justice minister.

Other LKP members, including Rep. Jeong Yong-ki, also voiced their opposition to the nomination. “The president is responsible for protecting the constitution, but he is challenging the constitution and the people by naming a member of an unconverted anti-state force as the justice minister,” Jeong said.

The Bareunmirae Party also demanded that Moon withdraw Cho’s nomination. “Cho is carrying a more serious problem than his past of plagiarism and failure to vet candidates when he was serving as the senior civil affairs secretary,” Sohn Hak-kyu, chairman of the party, said. “His biggest problem is splitting the people.”

The ruling Democratic Party (DP) defended Cho. “Objecting to a nominee no matter what happens is against what the people want,” said Rep. Lee In-young, floor leader of the DP. “Reform of the judiciary and the prosecution are the people’s order. The nomination is to follow through with the people’s desire, and it is a justified action.”

Another senior DP member, Rep. Park Ju-min, said Cho has long promoted the reform of the prosecution and he is the best candidate to head the Justice Ministry for his past role as the senior civil affairs secretary. “The opposition lawmakers must vet his abilities to perform his tasks, instead of just attacking him,” Park said.

Amid the political storm surrounding his nomination, Cho remained tight-lipped on Monday, simply saying that he will answer all questions at his confirmation hearing.

He formed a team to prepare for the confirmation hearing with Justice Ministry officials and stopped posting on Facebook, which he has actively continued throughout his career as the senior civil affairs secretary for the past two years and two months.

In addition to his National Security Act violation, Cho’s wealth of 5.5 billion won ($4.53 million) and his children’s prestigious education, as well as suspected plagiarisms, will likely be addressed at the upcoming hearing.

Meanwhile, National Assembly Speaker Moon Hee-sang and floor leaders of the DP and Bareunmirae Party met Monday to discuss the scheduling of confirmation hearings. The LKP’s floor leader, Rep. Na Kyung-won, did not attend the meeting because she is on summer vacation.

The DP and Bareunmirae negotiators agreed that the confirmation hearings take place between Aug. 19 and 30, but no final decision was made due to Na’s absence.

Of the new senior officials nominated by Moon on Friday, seven, including Cho, need to undergo confirmation hearings.