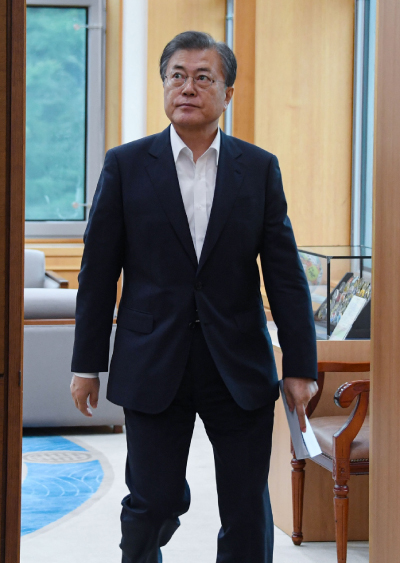 President Moon Jae-in on Monday asked the nation to refrain from making emotional responses toward Japan’s economic retaliations, a conspicuous change from the angry rhetoric issued against Tokyo over recent weeks.

Korea takes Japan’s economic retaliations seriously because they are unfair and also caused by the two countries’ bitter history, Moon said in his opening remarks at a senior secretaries’ meeting on Monday.

“But our responses to Japan’s economic retaliations must not be emotional,” Moon said. “We must be resolute and cool-headed, but we also need to take a long breath to think about a fundamental resolution.”

Moon also said Korean ancestors, even when they were fighting for independence from Japan’s colonial rule a century ago, promoted cosmopolitanism. He also appreciated the Korean people’s mature citizenship by rejecting hostile nationalism, while supporting equality and peaceful coexistence with Japan.

“While the Korean people are resolutely opposing the Japanese government’s economic retaliations, they are acting honorably in order to protect the friendship between the people of the two countries,” Moon said. “When the people of the two countries communicate with each other based on mature citizenships and the values of democracy and human rights and strengthen their friendship with love for humanity and peace, the future of Korea-Japan relations will be brighter.”

He also said the Korean government will push forward meticulous strategies to develop the economy by using the crisis as an opportunity.

Moon also said Korea’s goal is not just building a strong economy. “We will build a global community of peace and cooperation, where the people are valued and universal values are protected,” he said. “To this end, we will work with the international community and fulfill our responsibility and play our roles. Korea will be advanced as an exemplary country of human rights and peace, not just economic powers.”

In his message, Moon also stressed that “our state of mind became more resolute ahead of Liberation Day,” noting that this year marks the 100th anniversary of Korea’s independence movement against Japan’s colonial rule.

Korea commemorates the anniversary of its liberation from Japan in 1945 on Aug. 15. This year, the anniversary falls on Thursday, and Moon is scheduled to deliver a speech, traditionally used as an opportunity to issue a message to Japan.

The latest remarks were seen as a prelude to Moon’s Liberation Day speech, and it was notably softer than his earlier messages. After Japan tightened export restrictions in July on three materials key to Korea’s semiconductor and display industry, Moon, Blue House officials and the ruling Democratic Party (DP) have been open about their disapproval.

Over the past weeks, Moon repeatedly said Korea will defeat Japan in the economic war and criticized Japanese Prime Minister Shinzo Abe and his administration for having a malicious intention to hurt Korea’s economic future. Moon’s message on Monday, however, put more emphasis on his original two-track policy with Japan, where the history issue will be handled separately from other issues of bilateral cooperation.

Moon also did not mention on Monday any countermeasures that Seoul will take against Tokyo, although he said that Korea’s resolution is renewed ahead of Liberation Day.

Meanwhile, the Blue House said Monday that a controversial report from a Japanese newspaper was found to be erroneous. On Sunday, Japan’s Mainichi Shimbun reported that Washington was backing Tokyo’s argument that the Korean Supreme Court’s rulings that order Japanese firms to pay compensations to victims of wartime forced labor is against the 1965 Korea-Japan claims settlement agreement.

“The National Security Council is having frequent contact with its U.S. counterpart, and the U.S. side told us the report is not true,” Presidential Spokeswoman Ko Min-jung said Monday.

In the Japanese news report, the Foreign Ministry of Japan contacted the U.S. State Department after the Supreme Court’s ruling on Oct. 30, 2018. The consultation was to discuss the possibility that the Korean plaintiffs would ask U.S. courts to freeze assets Japanese companies held in the United States, the report said.

The Japanese Foreign Ministry reportedly asked the U.S. State Department to send its opinion to a U.S. court, if a lawsuit is filed in the United States, and back Tokyo’s argument that the 1965 claims settlement accord resolved all compensation issues. The U.S. State Department delivered its support for Japan’s position late last year, the newspaper said.