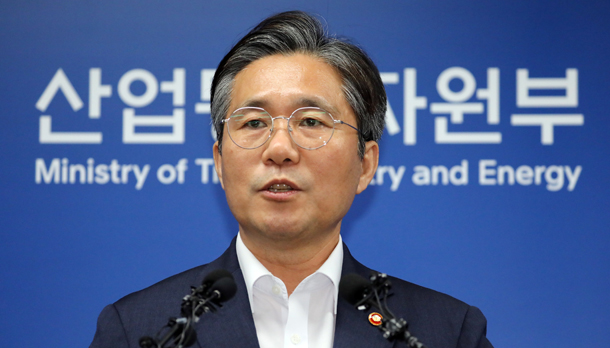 Minister of Trade, Industry and Energy Sung Yun-mo announces on Monday that the Korean government is dropping Japan from its so-called white list of trading partners. [NEWS1]

The Korean government excluded Japan from its so-called white list of trading partners, a reversal from last week where it suspended the decision after Japan approved the export of a key industrial material that was restricted since early July.

Starting next month, Japan will be stripped of export fast-track privileges shared with 28 other countries including the United States, United Kingdom and Germany.

However, instead of demoting Japan to the same group as China, which is subject to a tougher regulatory process, the government created a new group.

Countries on the white list are members of all four multilateral export control regimes: the Wassenaar Arrangement (WA), Nuclear Suppliers Group (NSG), Australia Group (AG) and the Missile Technology Control Regime (MTCR). There are currently 30 countries in this group including Korea and Japan.

“Countries that are members of all four multilateral export control regimes but have export restrictive systems that go against the principles of the regimes will be now be included in the newly-created category,” said Minister of Trade, Industry and Energy Sung Yun-mo. “Japan will now go into this new category.”

The Korean government said it has created a new group because Japan is still a member of all four export control regimes.
The minister stressed that the actions strictly followed international and local laws.

The government stressed that the action was not merely a counterattack against Japan.

The Trade Ministry added that it will try to minimize the impact of the changes on local exporters.

Under the new category, a stricter regulatory process will be applied.

An open export license is given to countries on the white list, and Japan will now have to get license exceptions.

Validations of export licenses have been shortened from three years to two.

Additionally, for individual licenses, the evaluation period has been extended from five days to 15 days.

The only difference between countries not on the white list and in the newly-created group – which is Japan – is the amount of documents needed for approval.

“The action taken by the Korean government [on Monday] is the same as the one taken by Japan,” said Cho Young-moo, LG Economic Research Institute researcher. “Japan has created a new category for Korea and imposed export restrictions by excluding Korea from its white list, which is a first.”

Last week the Korean government was planning to announce a decision on whether to remove Japan from its own white list in response to Japan dropping Korea from its list. That followed restrictions on the export of three key materials needed in manufacturing semiconductor chips and displays, which went into effect on July 4.

But when Japan on Thursday approved exports of one of the three restricted materials, the Korean government suspended its decision.