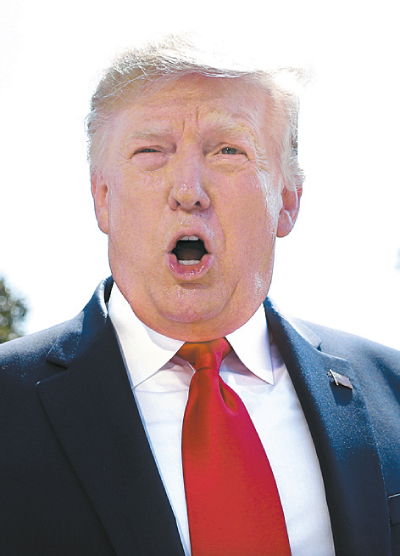 U.S. President Donald Trump asserted that South Korea has to pay more for defense at a fund-raiser in the Hamptons in New York on Friday while reportedly mocking President Moon Jae-in’s accent and claiming it was “easier” getting Seoul to pay up than to collect rents in Brooklyn.

The New York Post reported that Trump, at a fund-raiser for his re-election campaign at real estate developer Joe Farrell’s mansion in Bridgehampton, New York, noted that South Korea has a thriving economy and makes great televisions, and was quoted as saying, “So why are we paying for their defense? They’ve got to pay.”

Trump also allegedly mimicked Moon’s accent while describing how Seoul “caved” into his “tough” negotiating tactics. Recollecting his childhood collecting rents with his father, Trump was quoted by the daily paper as saying, “It was easier to get a billion dollars from South Korea than to get $114.13 from a rent-controlled apartment in Brooklyn,” apparently joking that “those 13 cents were very important.”

Trump’s remarks came as Washington cranks up pressure on Seoul to pay a sharply higher share of the cost of stationing U.S. troops in South Korea. The two countries will soon begin negotiations for the next bilateral Special Measures Agreement (SMA).

Under the current one-year bilateral defense cost-sharing deal, Seoul agreed to pay around 1.04 trillion won this year, which amounted to some $920 million at the time of the signing in March. This was 8.2 percent more than what it spent last year for the stationing of 28,500 U.S. troops in South Korea. Seoul already pays for around half the cost. Trump also “made fun” of other U.S. allies including Japan and the European Union and likewise was said to have mimicked Japanese Prime Minister Shinzo Abe’s accent when recounting conversations about trade tariffs, according to the New York Post.

During the fund-raiser, Trump was also said to have boasted of his friendship with North Korean leader Kim Jong-un and claimed, “People say he only smiles when he sees me.” He spoke of a letter he received from Kim earlier that week, something he revealed to reporters in Washington earlier Friday. Trump told reporters in Washington ahead of departing for the Hamptons that in the letter, Kim conveyed that he “wasn’t happy” with the “war games,” referring to joint drills held by Seoul and Washington.

Trump commented that he had “never been a fan” of the joint military exercises, adding, “You know why? I don’t like paying for it. We should be reimbursed for it, and I’ve told that to South Korea.”

Trump also told reporters that South Korea and Japan need to “start getting along with each other,” saying the two countries “are fighting all the time.”

He added, “they’ve got to get along because it puts us in a very bad position.”

In a confusing tweet last Wednesday, Trump claimed Seoul “has agreed to pay substantially more money to the United States,” adding that last year, at his request, “South Korea paid $990,000,000” while purporting that the United States has “32,000 soldiers on South Korean soil.”

It was unclear where he got his numbers from.

The Washington Post reported that Trump raised $12 million for his reelection campaign at two fund-raisers in the Hamptons Friday.

U.S. Defense Secretary Mark Esper met with South Korean officials and President Moon in Seoul Friday on his first trip to Asia since assuming the post as Pentagon chief. The U.S. Department of Defense did not make any specific mention of defense cost-sharing other than referring to a discussion of key bilateral “alliance issues.”

The South Korean Ministry of Foreign Affairs likewise reiterated that negotiations for the 11th SMAs have yet to begin and that Seoul expects them to proceed in a “reasonable and fair way.”

However, Trump is expected to come down hard on allies to pay for defense ahead of the 2020 presidential elections, a key pledge from his first campaign, and try to use Seoul as an example.

Bob Woodward, an associate editor of The Washington Post, in his best-selling book published last year, “Fear: Trump in the White House,” describes a National Security Council meeting on Jan. 19, 2018, involving Trump and his then closest aides - U.S. Secretary of State Rex Tillerson, Defense Secretary James Mattis and National Security Adviser H. R. McMaster - all no longer in the White House. Trump had allegedly fumed over the “$3.5 billion expense of stationing 28,500 U.S. troops” in South Korea.

Mattis was quoted as saying that the United States gains the “ability to defend the homeland with forward deployment” of the 28,500 troops in a “cost-effective” way and conveyed to Trump that the arrangement with South Korea was “one of the great national security bargains of all time.”