Swimmers of all ages gather for FINA Masters

Swimmers of all ages gather for FINA Masters 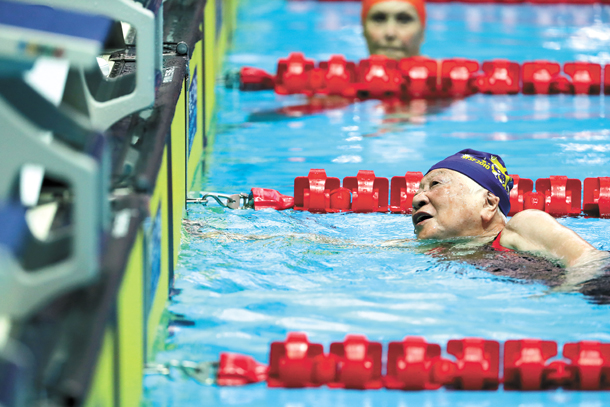 The Masters Championships is an international amateur swimming competition that was first held in Tokyo in 1985. Until 2014 the tournament was held in even years, but from 2015 it has been held in odd years immediately after the FINA World Aquatics Championships.

As an amateur contest, the Masters Championships is a much bigger event, with more competitors and more of a party atmosphere than the World Aquatics Championships.

Interestingly, the Masters Championships’ opening ceremony wasn’t held until Aug. 11 at Nambu University’s Friendship Garden, a day before swimming events kicked off but a full week after the championships began.

Although the Masters Championships is not as competitive an event as the World Aquatics Championships, it is definitely bigger. This year 6,000 athletes are competing from 84 different countries. About 75 percent of competitors are swimmers.

Athletes compete in five aquatics sports - swimming, diving, artistic swimming, water polo and open water swimming - over two weeks at the Masters Championships. High diving, which is contested at the World Aquatics Championships, is not included in the Masters due to safety issues.

The Master Championships is open to athletes who are 25 years or older, except for water polo, as the minimum age for the sport is 30. Due to this, the Masters has a wider age range and background of athletes, as it includes lifelong amateurs and former professionals.

As the Masters Championships has races for different age groups - normally split into 5-year age brackets - there are a total of 985 gold medals up for grabs. This is about three times more than the 2016 Rio Olympics, where there were 306 gold medals available across 28 sports.

When compared to the recent World Aquatics Championships, the Masters Championships offer 10 times as many gold medals. A total of 2,955 medals - gold, silver and bronze combined - are available throughout the amateur competition.

Tenev competes in a total of 11 events this year - eight in swimming and three in diving.

Of the Korean competitors, swimmer Jo Eun-young is the oldest competitor, at 81. She will be competing in seven swimming races.

In open water swimming, which takes place in Yeosu, South Jeolla, a number of athletes over the age of 70 competed this year.

But it’s not only the age of the competitors that stands out. The Masters Championships is also an opportunity for competitors from around the world to get to know each other, and this comradery often extends into the races as well.

When Julia Schaeffer of Brazil crossed the finish line of the 3,000 meter open water race for the 70-74 age group on Aug. 9 at Yeosu EXPO Ocean Park, the crowd went wild, as did the other competitors in the water.

Schaeffer didn’t win the race - in fact she finished a good 51 minutes and 09 seconds behind the winner - but she did finish, and the crowds and racers stayed behind to celebrate her crossing the finish line. Schaeffer finished her race at 1 hour 45 minutes and 57.7 seconds.

As well as the heroics and success stories, there is a serious risk to an all-ages swimming tournament. On Aug. 10, a water polo athlete from the United States suffered an acute heart attack during a water polo match. The athlete, who was in his 70s, was removed from the water and given CPR, but died in the hospital the following day.