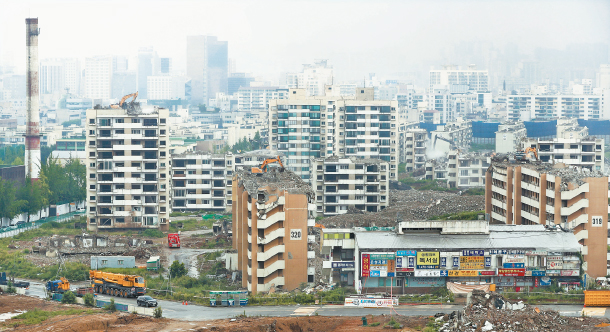 Work continues on the Dunchon Jugong Apartment complex in eastern Seoul on Monday even with the impending introduction of tougher price regulations on real estate projects. [YONHAP]

Panic is setting in after the government said it would be capping prices on some real estate projects.

“If we knew that the government was going to regulate preconstruction sale prices, we would’ve canceled the project,” said Chung Geum-shik, head of a union of workers reconstructing an apartment complex in Dongdaemun in eastern Seoul. “A major loss is inevitable since we can’t just stop.”

The Dongdaemun reconstruction project is one of the 66 projects that already has the approval of the Seoul Metropolitan Government. For all the approved projects, a total of 68,000 units are being built.

Although the government did not disclose details of the newly implemented regulations, including the apartment projects that will be subject to the regulations or the exact level of capping, all of the projects in Seoul are likely to be candidates.

Under existing regulations, the government can impose a maximum cap on the sale prices if one of three conditions are met: preconstruction sale prices in the vicinity are rising at twice the consumer price index (CPI); more than five bids are received for each apartment (or more than 100 if the apartment is smaller than 85 square meters [915 square feet]); or if transaction volume for apartments is up more than 20 percent from a year earlier.

But under the new regulation, these conditions do not have to be met. A project simply has to be in an area designated as overheated by the government. At present, all 25 areas in Seoul have that designation plus six others elsewhere.

This is not the first time the Korean government has placed a maximum cap on preconstruction sales prices.

It was first introduced during the Roh Moo-hyun administration in the third quarter of 2007, when President Moon Jae-in was serving as the Blue House chief of staff. Housing prices especially in Seoul were rising at an alarming rate. Between 2000 and 2006, Seoul apartment prices were up 13.6 percent on average a year.

The Ministry of Land, Infrastructure and Transport expects that the new price limit rules will help lower preconstruction sale prices by 20 to 30 percent. Additionally, it sees these measures having a ripple effect.

Land Minister Kim Hyun-mee last month first raised the possibility of toughening the price limit rules as preconstruction sales prices, especially for the reconstruction of apartments in Gangnam, have been rising at a fast pace this year despite the tough real estate regulations the Moon government employed since the beginning of this administration.

According to the Korea Housing and Urban Guarantee Corp., preconstruction sale prices this year through June on average rose 12.7 percent from 10.38 million won per 3.3 square meters to 11.70 million won. In Seoul during the same period, prices rose 22 percent, from 21.89 million won for the same space to 26.78 million won.

In June, nationwide prices rose an average of 9.6 percent on year, while Seoul’s rose 21 percent. Consumer prices for the whole county only grew 0.7 percent during that period. In Seoul, they rose at 0.9 percent.

The changes are expected to increase the burden on homeowners whose apartments are approved or are currently in process of reconstruction.

This is because the construction costs financed through selling the newly added units to new customers will shrink. Some unions are threatening legal action, citing a clear violation of personal property rights.

Experts raise concerns that in the long run, the policy will have the opposite effect, leading to an increase in prices.

“The government could control the preconstruction sale prices with the regulation [for now],” said Kim Deok-rye, head of the housing policy research department at Korea Housing Institute.

“But in five years, it could put pressure on apartment prices to go up due to a reduction in new housing supply.”

Some raise the possibility that those who have moved out of Seoul could return to the capital due to various policies adopted by the current administration, including the shutting of some autonomous private high schools.

The education policy changes are expected to increase the number of people relocating to Gangnam, which is well known for its competitive education. The 50-percent tax on apartments increasing in value more than 30 million won after reconstruction, reapplied since last year, is expected to add to a further reduction in the housing supply.

There are also questions as to whether the recent regulation will be effective, since the housing market between 2007 and 2014 was weak due to global economic conditions.

“For the time being, new apartment projects in the overheated areas including Seoul will be unlikely,” said Kim Deok-rye.