Silver is the poor man’s gold, and with uncertainty in the air - with the China-U.S. trade war, the Korea-Japan “white list” battle and North Korea frequently firing missiles - it is getting a lot of attention.

According to Bloomberg and Hana Financial Investment, silver traded at $16.97 last Friday, up from $14.59 at the end of May. It is up 16.3 percent over the last two months. In part, it is moving in sympathy with gold, which just broke $1,500 per ounce at the New York Mercantile Exchange last Wednesday for the first time in six years.

People look for safe havens during times of uncertainty, and if they can’t afford gold, silver is the next stop.

“As people across the world tend to prefer safe-haven assets, the price of gold sharply increased, and accordingly, the price of silver, which is a substitute for gold, is also following suit,” said Jeon Seung-ji, researcher at Samsung Futures.

“Although silver is extensively utilized as raw material for industrial purposes, its price tends to go up as well when gold becomes pricey since silver traditionally plays a role as a currency,” said Kim Hoon-gil, senior general manager at Hana Financial Investment.

“The price of silver will soar more than 20 percent within six months and exceed $20 per ounce,” predicted Kim. 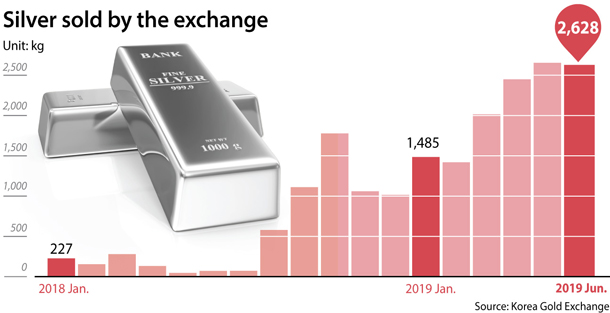 When it comes to affordability, silver is generally more attractive to investors.

The price of a 1-kilogram (2.2-pound) gold bar was 843,000 won on Sunday at Korea Gold Exchange. The price is only one eightieth of that of an equally heavy gold bar, which costs over 67 million won.

“Since the price of gold has become higher, many investors are shifting their attention to silver bars,” said Song Jong-gil, executive director at the Korea Gold Exchange. He added that since March a total of 2 tons of silver bars have been sold. The sales volume during the first half of this year was around 13 tons. That compares with 0.9 tons in the first half 2018.

Witnessing the potential of silver, world-renowned investors, like Warren Buffet and Jim Rogers, have invested heavily in the metal in the past. Jim Rogers has been purchasing silver since 2008.

“In the end, the winner in the currency war is real assets,” said Rogers in an interview with media outlets in Korea.

“If I am asked to choose between gold and silver, I would go for silver.”

Silver is not only cheaper than gold, but it is more volatile, meaning that it can offer disproportionate profits when commodity prices move.

“When looking at past statistics, silver’s volatility is higher about two times than that of gold,” said senior general manager Kim Hoon-gil.

“When the price of gold in August 2011 was $1,900 per ounce, up 97 percent since 2008, marking the highest in history, the return of silver during the same period was 145 percent, far outperforming gold.”

Despite the affordable price and high return ratio, the biggest problem is that the price moves fast in both directions.

“Unlike gold, the demand for silver for industrial usage amounts to 60 percent, so it is hard to classify silver only as a safe asset,” said Kim So-hyun, analyst at Daishin Securities.

“As the world’s economy is slowing, it is highly likely that the demand for silver could go down.”