Based in Korean cuisine, but breaking boundaries: Chef Sun Kim of Singapore’s Meta rethinks the basics with new ingredients

Based in Korean cuisine, but breaking boundaries: Chef Sun Kim of Singapore’s Meta rethinks the basics with new ingredients 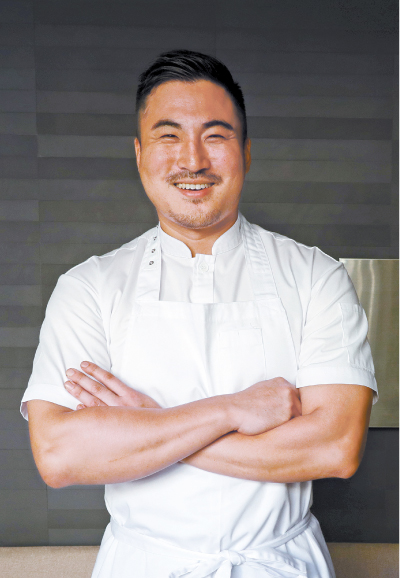 Chef Sun Kim is the first Korean chef to earn a Michelin star in Singapore. He runs the fine dining style restaurant Meta, the more casual restaurant Kimme, as well as Thevar, an Indian restaurant, in Singapore. [LEE SUN-MIN]

SINGAPORE - With more and more attention from foodies around the world being paid to Singapore, especially since this year’s World’s 50 Best Restaurants list was revealed here in June, Korean chef Sun Kim of restaurant Meta is stepping up to add to the country’s culinary melting pot. 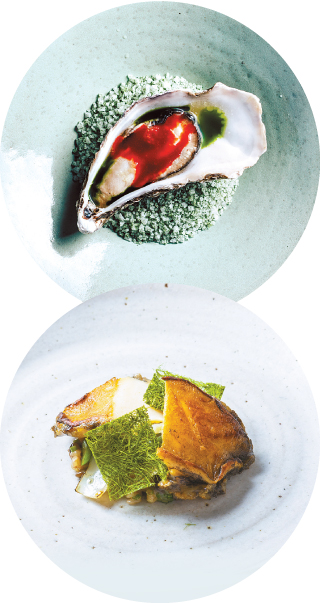 Some of the dishes available at Meta: oyster, top, and abalone, center.

The chef, after years of helping his mother, who ran a gamjatang (pork stew) restaurant in Korea, never doubted that he wanted to do anything other than becoming a chef. One day, while he was working in Korea, he paid a visit to a bookstore and picked up a book on chef Tetsuya Wakuda in Australia. From that moment, he was determined to go to Australia and learn more about how to cook.

Following his dream to study and work in Australia eventually led him to find a home in Singapore in 2014. The following year, he opened his restaurant Meta. Just two years later, Meta earned a star on the Michelin Guide Singapore.

The honor was not widely covered in Korea, as it was the same year that Seoul welcomed its first edition of the Michelin Guide.

Kim has since opened the more casual restaurant Kimme, as well as modern Indian restaurant Thevar. He also moved Meta to a more spacious location to cater better to returning and new customers.

The chef says his food isn’t necessarily Korean. While some dishes may not look or resemble Korean cuisine, they may have familiar Korean flavors. “Not being overpowered by anything, while also not being plain is what I try to do. It’s what makes my own style of food,” said chef Kim, while meeting with the Korea JoongAng Daily. The following are edited excerpts from the interview. 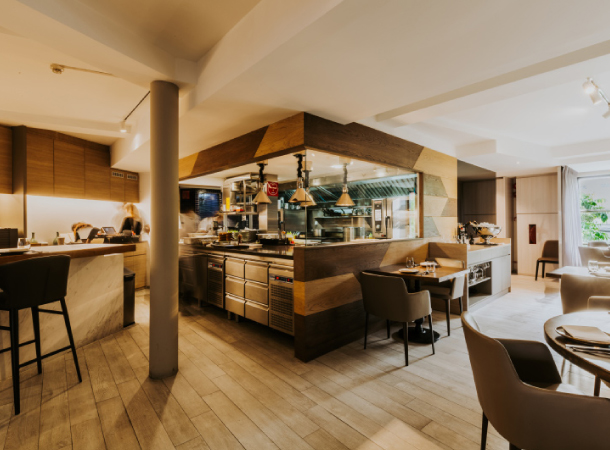 Above is the open kitchen at Meta, where diners can see the chefs in action. [META]

Q. What kind of restaurant did you dream of having before opening Meta?

A. I used to work at a restaurant where top-notch ingredients were used. While preparing the food there, I started to think about whether I could prepare something that people would pay about 500 dollars per person for. I started to think whether I could offer that much caviar and sea urchin to each customer. These kinds of foods aren’t something that customers get to eat everyday and the price isn’t something customers can pay often. Then, I decided that I wanted people to think that they can come to my restaurant often to get food rather than think of it as a place that they go once a year or once in their lifetime. Of course, expensive ingredients are good, but you can’t use them everyday.

I think it is a bit more creative. If I categorize my food as modern Korean, then I may have to limit myself to create something within the boundaries of Korean food, or something inspired from it. I don’t like that. I didn’t want to limit myself. Many come and just assume I do Korean food because I’m a Korean chef. I wanted to show that I do something different. Of course some dishes are inspired by Korean cuisine, but I’m not limited. In Singapore, all kinds of ingredients, whether fresh or processed, are available. Something that chefs in Korea have difficulty finding is often easy to find in Singapore because there are a variety of restaurants placing orders for those ingredients. So I cook with ingredients I think are superb and in season. Singapore doesn’t really have any distinct season changes, but the ingredients coming from Europe, Korea or elsewhere in Asia are seasonal. When it’s summer there, we call our menu a summer menu. I don’t really give any deeper philosophical meaning to food. Food is something one should enjoy pleasantly. And food should be something that’s worth the price.

For the dishes you have that are inspired by Korean food, how do you make them?

When cooking Korean food, I use ingredients I’m very familiar with. For spices and jang (fermented sauces like gochujang or doenjang), I use pre-made products due to the weather restrictions. But I pickle things myself and make kimchi as well. I have never really studied cooking Korean food in depth, but what I have eaten throughout my life is Korean food. I just started to think a lot about what to mix and match, and those ideas led me to try out different things. When I need certain skills or knowledge to execute, then I sit down with my staff and study. If we just serve kimchi on the side of pork, it might be too Korean for those who are familiar with bossam. Instead of just putting kimchi, we took a type of Singaporean salad made with pineapple, cucumber, carrot, peanuts and others, which is eaten as often by Singaporeans as kimchi by Koreans. It’s not too sour but gives you that crispy texture when chewed. I personally like using vinegar, soy sauce, and ginger.

How did you develop the rest of the menu at Meta?

I travel a lot to eat. When I cook, I always look back to the basics. I always find my answers from the classic combination, such as duck with orange or pickles. More variations I find from collaborations with restaurants overseas. I go to Japan to cook in November and Bali in October. As I eat during my travel, I see ingredients that people simply don’t use as much because they don’t know how to use it. That’s my chance to study.

At the more casual Kimme, dishes inspired by what’s popular in Korea, such as bingsu, left, and bibimbap, right, are served. [KIMME]

What was the biggest advantage of having one star on the Michelin Guide?

I got the star in June 2017. It put me on the map. We had some regulars before, but the recognition with the Michelin Guide made people who didn’t know Meta come. I had zero expectations that I would be earning a star. Singapore didn’t have the Michelin Guide before then.

Ever since I got my first Michelin star, I have grown so much. I gained the confidence that I could continue to do what I want to do. The restaurant can become even better when the entire staff works hard, so I’m trying to train and educate the staff as well so that I can grow with my staff. Everything about the restaurant, even if it’s not about food, have an impact on the food after all. I need to make my staff happy. I have become cautious when making any kind of decision because now I have a larger staff, which gives me much more responsibilities.

What made you want to open Kimme?

At Meta, we offer course meals. People sometimes ask whether we would serve individual dishes a la carte. That gave me some stress and made me decide to open one more restaurant and serve dishes we weren’t able to serve at Meta. There, we have to think about the balance throughout the course, so it is difficult to use something strong or too different from the overall flow.

At Kimme, since it’s more casual, we can try dishes that are much more Korean, and much more fun. I sent Louis Kim, a sous chef at Meta, to be the head chef at Kimme, and worked with him to develop casual dishes.

Many Koreans go to Kimme, while locals come for Meta. I think. The dishes at Kimme aren’t really Korean, but the use of elements that make Korean food Korean seem to attract Koreans.

Have you thought about doing something more permanent in Korea?

I think I’m much more comfortable being overseas. I never really thought about opening a restaurant there. If I were to open more in Singapore, I would want to do straight up Korean food restaurant or maybe a Korean barbecue place.