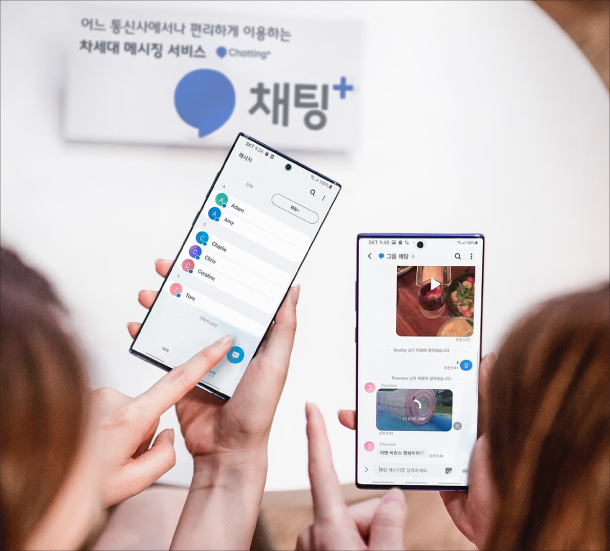 Korea’s three mobile carriers - SK Telecom, KT and LG U+ - on Tuesday upgraded their basic smartphone messaging apps so that users can have group chats and share large files, similar to the service offered by Apple’s iMessage and local app KakaoTalk.

The new service, dubbed Chatting+ is not a new standalone app but actually a complete overhaul of the messaging protocol. Chatting+ works by using rich communication services (RCS), a protocol developed by the Global System for Mobile Communication Association, better known as GSMA, to replace the short message service (SMS).

RCS currently only works with Samsung Electronics phones, including the Galaxy S8, S9, S10, Note8, Note9 and Note10. A spokesperson from LG U+ said that phones from LG Electronics will be able to support RCS-based messaging from November. LG plans on offering the upgrade starting with its latest phones - the V50 and G8.

iPhones currently don’t support the messaging protocol. Users of the Apple phones will still be able to communicate with each other in a similar way to Chatting+ though iMessage, but conversations with other operating systems will have to be via SMS or third-party apps like KakaoTalk.

This isn’t the first attempt to introduce RCS in Korea. All three carriers have introduced some RCS services in the past, but the services were locked to each mobile network. This is the first time that all three carriers co-developed a single compatible RCS-based messaging service. Mobile carriers hope the new service will rival separate chat apps like KakaoTalk.

With the upgrade, the SMS and multi-media message service (MMS) will all work on data, like iMessage and KakaoTalk. Each message supports up to 2,700 characters in Korean or 4,000 characters in English. Files as large as 100 megabytes can be shared.

Users with a phone that can use the RCS protocol will be able to tell which of their friends have access to Chatting+ by looking out for a blue speech bubble icon that will appear next to other users’ names in their phone’s contact list.

Phones that cannot use the protocol will still receive messages but via SMS.

“By offering Chatting+ compatible with all three carriers, we plan to introduce a more upgraded service [in the future] by adding features like money transfers and sending mobile gift coupons,” said Park Hyun-jin, senior vice president of the 5G business unit at KT.

Money transfers and gift vouchers are already available on KakaoTalk.