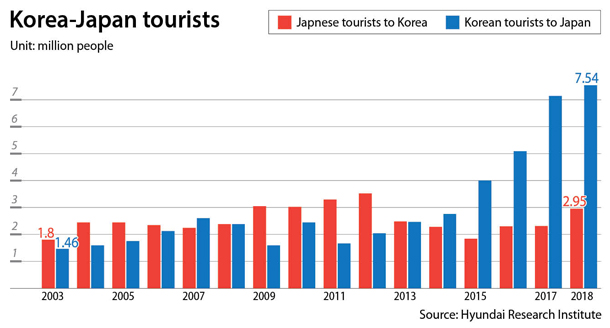 The damage to Japan’s tourism industry will be roughly five times bigger than to Korea’s if the bitter trade war between the countries continues into 2020, according to study by a local think tank.

According to the Hyundai Research Institute (HRI), Korean visitors to Japan could fall 81.2 percent in 2020 if the boycott movement targeting Japan continues.

“The 81.2 percent is a maximum figure, but considering Chinese tourists to Korea fell 75.1 percent on year in April 2017 due to conflict over the U.S.-led antimissile shield, my judgment is that the assumption is not unrealistic,” said Ju Won, an HRI researcher.

On a macroeconomic level, this could slash 884.6 billion yen ($8.4 billion) worth of Japan’s production for tourism-related product and service purchases. In terms of value added - the sale prices minus the production cost - it could cost 455.8 billion yen, and some 95,785 jobs might be affected.

The calculations looked at the impacts on Japan’s retail, transportation, food, accommodation and service industries.

Combined, Ju predicted that a Korean boycott of tours to Japan could pull down the country’s overall economic growth rate in 2020 by 0.1 percentage points.

Korea’s tourism industry would be affected as well. Japanese tourists could plummet 39 percent on year in 2020, bringing down tourism-related production by 1.9 trillion won ($1.5 billion) and value added by 768.7 billion won. A total of 18,176 jobs would be lost.

If the predictions come true, Korea’s economic growth rate for 2020 would be pulled down by 0.05 percentage points.

The impact is bigger for Japan because outbound tourists are bigger than inbound.

“The number of Japanese travelers to Korea has been largely stagnant while Koreans traveling to Japan jumped threefold in the past four years,” he added.

Between 2014 and 2018, Korean tourists’ spending in Japan more than doubled to $5.2 billion. Spending by Japanese tourists in Korea fell slightly from $2 billion to $1.8 billion during the same period.

In the report, Ju concluded that although the damage to Japan would be bigger, the impact would still be hard on Korea if Japanese tourists stop traveling to Korea.

“Conflict that comes from diplomatic issues should be confined within communication channels between the two governments,” Ju said.

“The public shouldn’t be stopped from voluntarily engaging in tourism boycotts - but the government and politicians should also take care to refrain from encouraging this movement.”