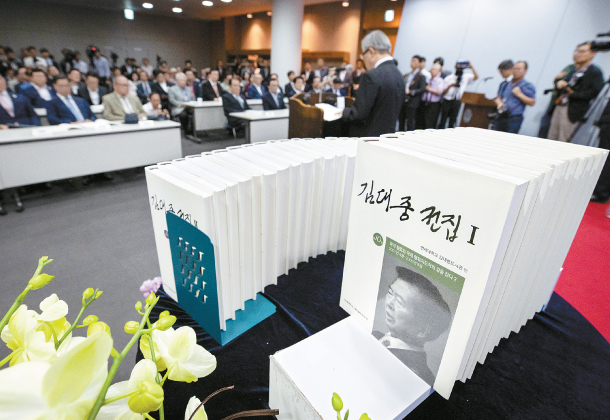 The Kim Dae-jung Presidential Library and Museum affiliated with Yonsei University in western Seoul hosts a party on Tuesday to commemorate the publication of a 20-book collection on former President Kim Dae-jung. [NEWS1]

The Kim Dae-jung Presidential Library and Museum affiliated with Yonsei University is publishing a 20-book collection on former President Kim Dae-jung this coming Sunday, the 10th anniversary of Kim’s death, consisting solely of his speeches, statements at the National Assembly, interviews, diaries and memos.

“They shed light on some of the darkest and brightest moments of Kim’s lifetime,” said Park Myung-lim, professor of Korean studies and East Asian relations at Yonsei University in western Seoul and head of the library. “We focused our efforts on providing these records with utmost accuracy.”

The 20 books carry records of Kim’s speeches and memos from 1948 to 1997 before he was elected as the eighth president of the country and are an addition to the 10-book collection published by the library in 2015, which consist of Kim’s memos and speeches during his presidency from 1998 to 2003. Kim died in 2009 at the age of 85.

“We collected records from all over the country and also outside of the country, numbering at some 250,000 pieces in total,” Park said. “In publishing these records, we did not change one single letter, except in some sections of the records where we could not make out what it said.”

Park said that the publication took three years for 25 researchers and staff members at the library and university to complete. Because the publishing of the books was funded privately, they had to settle with just 300 copies of the collection this time, he added.

The library hosted a reception for the publication on Tuesday.

A few days before the reception, Park spoke with the JoongAng Ilbo about the details of the books and what he found to be surprising, unexpected and most memorable about the former president. 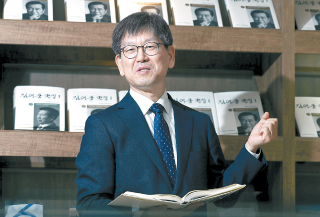 Park Myung-lim, professor of Korean studies and East Asian relations at Yonsei University in western Seoul and head of the Kim Dae-jung Presidential Library and Museum affiliated with the university, speaks to the JoongAng Ilbo earlier this month about a 20-book collection on Kim’s memos and speeches from 1948 to 1997 to be published by the library this coming Sunday. [CHOI SEUNG-SHIK]

Q. Is this the first time that anyone has published a biography about a former president of Korea that consists completely of historical documents, records, memos and speeches instead of relying on the person’s memory of events?

A. Ever since the “Annals of the Joseon Dynasty” was published, yes, this would be the first time that a publication dealing strictly with historical documents regarding a leader is being published in Korea. We collected information from archives and libraries not only across the country but also in the United States including the National Archives and in Japan as well. We also collected the personal memos of Kim and late former first lady Lee Hee-ho, as well as some records provided by Kim’s aides, some of whom were actively involved in the pro-democracy movement in Korea with Kim. The government and Yonsei University also gave us a lot of support with our work. The whole process started in 2004, and we wanted to publish the collection during Kim’s lifetime, but there were just too many records to organize and it took longer than we had expected.

What were some of the most interesting finds?

I knew Kim was a man of details, but the extent that he went to, to prepare for speeches was unbelievable. Kim would not start writing his speech about a topic until he had read enough news articles, collected enough information and spoken with a number of experts on the topic. He would only start after he completely understood the topic. I think that is why his writings and policies had consistency to them. I recommend all policymakers of the country to read through the collection. They will find that Kim gave a lot of thought to each word he used in his speeches to make sure that they do not rile up the country or a neighboring country unnecessarily.

Was there anything surprising in the records?

Kim was challenged as a renegade during the dictatorial administrations in Korea. I found some records that showed Kim, during his exile in the United States, rejected an offer by some groups to work with them to create a government in asylum. I showed these documents to Kim during his lifetime and he said, “woe be to me, I wonder why God did not reveal these documents in those years when I was pestered by the dictatorial government.”

Will there be an English translation?

Our plan is to have some parts of the collection published in English and also publish some international research comparing Kim’s work with that of Willy Brandt and Nelson Mandela.

Is there a political motive in the publication of the collection?

I hope that the collection will provide an opportunity for both the conservative and the progressive parties to see beyond the political ideological divides and learn to analyze the positive and negative attributes about leadership in an objective manner.

What would you say is Kim’s greatest achievement?

I would say it is the fact that he tried to mobilize as many talented Koreans as possible for the country. He transformed the governance system, which used to be divided into politicians versus activists and those in power versus those vying for power, into a system that enables all Koreans to participate for the betterment of the nation. He created a system where experts, industrialists and democratic activists are able to work together in balance.

Kim was a realist. Although he was part of the opposition party in 1965, he agreed to the normalization of relations between Korea and Japan, to sending troops to Vietnam in 1964 and to the July 4 South and North Korea Joint Statement. While he was imprisoned on charges of conspiracy, Kim wrote a note that opposed the idea of removing U.S. troops from Korea.

I think the administrations of Kim and Kim Young-sam [president from 1993 to 1998] tried to give the power to the people to govern the country. But since then, administrations seem to want to be in charge of everything - the policies regarding culture, media, academia, civic organizations, science and digital information sectors seem to change drastically per administration.

I think it’s because both the conservative and progressive parties do not acknowledge that they are all working for the good of the country. If you recall, both the Kim Young-sam and Kim Dae-jung administrations worked with the opposition party on national security, international and peace issues. Kim Dae-jung appointed all conservative members of the government in the national security and foreign policy circles, such as the unification and foreign minister positions and ambassador to the United States. That kind of approach helped bring about the Obuchi-Kim statement in 1998. The administrations since then have not tried to work beyond the political divide. I hope that Korea will have leaders who can see and work beyond this divide.

What do you think is hindering such inter-party collaboration?

I am part of the 386 generation in Korea, [Koreans born in the 1960s and were active in the democratic movement of the 1980s] and I think the change needs to happen to this generation. Compared to the generations before us, we participated in the democratic movement comparatively briefly in our 20s, but we are staying comparatively longer in power. This is the issue that today’s young people in their 20s and 30s have as well. You see, we did not experience the same problems as them, such as the severe unemployment rate, contract worker and salaried worker inequality and the instability of their lives that discourage them from marrying and having children.