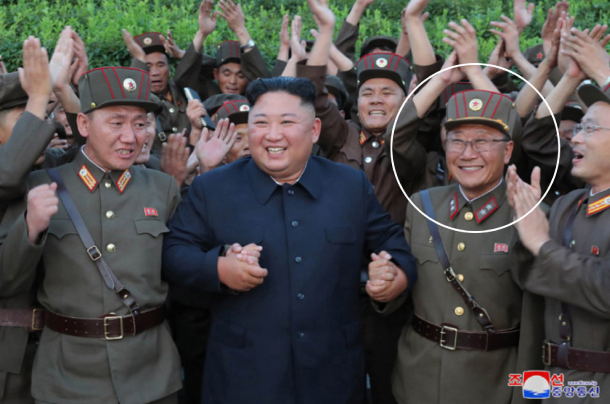 North Korea promoted over a hundred munitions scientists for their efforts in advancing the regime’s weaponry through recent tests, according to state media on Tuesday.

The Korean Central News Agency (KCNA), one of the country’s leading mouthpieces, reported that North Korean leader Kim Jong-un issued a personal order to raise the military ranks of 103 scientists in the field of defense research who have “made great contributions to bolstering up the military capabilities for self defense.”

Kim said the scientists “performed feats to be specially recorded by developing and completing new powerful weapon systems one after another which are of key importance in defending the Party, the revolution, the country and the people and guaranteeing the victorious advance of the revolutionary cause of Juche with matchless military strength,” the KCNA’s English language report read.

The rewarding of these scientists after a total of seven different weapons tests over 99 days since May 4 suggests Pyongyang is satisfied with its new arsenals’ completeness.

After it conducted two test launches of short-range ballistic missiles in May, the North tested similar rockets again on July 25 and Aug. 6, believed to be domestic variants of the Russian-made Iskander missile system.

On July 31 and Aug. 2, the country tested what it said were large caliber multiple launch guided rocket launchers; while on Saturday, it fired two more projectiles it said had a “tactical character different” from other weapons.

Pyongyang also revealed photographs of a newly developed giant submarine in late July that analysts said could be capable of launching a nuclear warhead.

The highest ranking figure among those promoted was Jon Il-ho, a munitions official who was seen accompanying Kim for a variety of weapons tests - including the launches of intercontinental ballistic missiles in 2017. Jon, who was promoted from a two- to a three-star general, is believed to be a member of the Academy of National Defense Science, one of the main agencies responsible for the country’s missile program.

While Kim has elevated the status and treatment of scientists after his rise to power in 2011, such a mass promotion of technical experts is unusual.

However, an official in South Korea’s Unification Ministry on Tuesday was cautious about linking the promotions directly to the North’s weapons tests, telling reporters that Kim ordered a similar round of promotions for key technicians and officials in the munitions field in April, and that accolades have followed major events in the North before.

“[The promotions] look like they have been issued to raise internal morale and consolidate ranks within the regime,” the official said.

Analysts say the promotions also suggest that Pyongyang is putting particular emphasis on improving its arsenal of conventional weapons so that they can serve as effective forms of military deterrents in the event that it abandons its nuclear or long-range missiles as a result of an eventual deal with the United States.