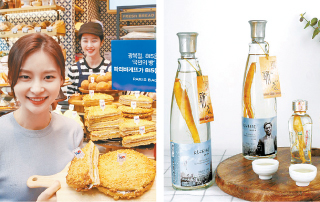 To celebrate Liberation Day today, retailers have introduced patriotic promotions to market their products and take advantage of the growing nationalistic sentiment following Tokyo’s decision to restrict exports to Korea.

While food companies are offering perks to patriots, some apparel brands have introduced new items designed to represent Korea.

Paris Baguette on Wednesday announced that it would donate 815 won (67 cents) to an organization for independent activists for every purchase that includes one of five selected items for purchase per customer. Customers who buy any of those five items today will also receive an 815 won discount.

“We have prepared the donation campaign to think over the meaning of Liberation Day this year, which also marks the 100th anniversary of the March 1 Independence Movement and the establishment of Korea’s provisional government,” said a spokesperson for Paris Baguette.

The bakery hasn’t decided which organization it will donate the money to but said it will make the donation at the end of the year, along with money gathered from its campaigns, to celebrate the March 1 Independence Movement and the establishment of the provisional government.

Dessert cafe franchise Sulbing is offering mobile discount coupons to select people who fly the Korean flag today. For a chance of winning, participants have to follow Sulbing on social media and post a picture of them flying the flag. A total of 74 people will be picked in a lucky draw to win a coupon for a shaved ice dessert.

“The event was introduced to remind people of the meaning of Liberation Day in a society where the number of families that put up the national flag has drastically declined,” according to Sulbing.

Sajo Group, which operates brands like Haepyo, will give out free cans of tuna packaged in red or blue tins, the colors of the Korean flag, to a select number of people who repost the group’s event post on their personal Instagram accounts. Participants have to write down their preferred type of canned tuna with the phrase, “Hurray for the independence of Korea.”

Online shopping platform 11st has partnered with The Patriot Maeheon Yun Bong-Gil Memorial Association to sell an alcoholic ginseng drink gift set. Yun was a young independence activist who set off bombs disguised as a water bottle and a lunch box during a birthday celebration for Japanese Emperor Hirohito held in Shanghai’s Hongkew Park on April 29, 1932.

The gift set consists of two bottles and two small cups. The labels are decorated with a photo of Yun. For every purchase, 10,000 won is donated to the association.

Adidas is reselling its limited edition running shoes with a design inspired by the Korean flag. The shoes, originally designed to commemorate the 1988 Seoul Olympics, feature the Taegeuk mark, the red and blue symbol in the middle of the Korean flag, on the tongue of the sneaker and the world “Seoul” in the colors of the Olympic flag on the insole. The shoes went on sale in offline stores today.