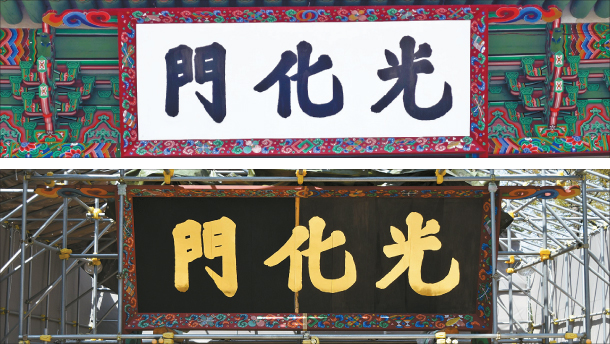 The current signboard of Gwanghwamun, the front gate of Gyeongbok Palace in central Seoul, which has black letters on a white background, top, will be changed into one with gold characters on a black background, above, by next year. [CULTURAL HERITAGE ADMINISTRATION]

The signboard affixed to Gwanghwamun, the front gate of Gyeongbok Palace in central Seoul, will return to its old self “sometime after 2020,” announced the Cultural Heritage Administration on Wednesday. After years of thorough research, the administration concluded that the new signboard will have the Chinese characters for “Gwanghwamun” in gold glided letters with a black background, like the original. For the color pigments for the dancheong (traditional decorative coloring on wooden buildings), the administration said it will be using traditional materials.

Currently, the Gwanghwamun signboard has the letters written in black on a white background. This signboard was put up in 2010 when the palace and the gate underwent renovations. However, last January, the administration announced that the current signboard is colored differently from the signboard that hung during the Joseon Dynasty (1392-1910) after analyzing a newly discovered photograph of Gwanghwamun found at the Smithsonian Institution in the United States in 2016. The black-and-white photograph shows the palace gate with a dark signboard and bright letters.

The current version was created based on two black-and-white photographs of the gate taken in 1902 and 1916, which show letters that seem darker than the backdrop.

The administration said it will be able to complete the coloring process by the end of this year. Afterwards, it will examine the completed signboard to see that there’s not a single flaw until the signboard gets put up.

The administration added that they’ll “pick a meaningful date that will emphasize the significance of Gwanghwamun” to hang up the signboard.