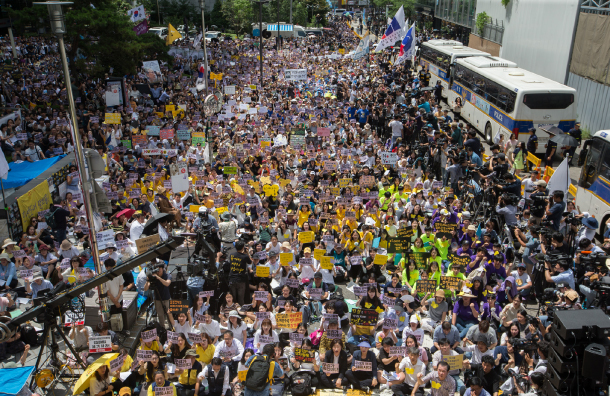 Hundreds of activists gather for the 1,400th weekly rally protesting Japan’s wartime sex slavery near the former Japanese Embassy building in central Seoul, marking the second International Memorial Day for Comfort Women Wednesday. In light of the “Me Too” movement, participants called out “With You!” to express solidarity with the victims, and similar rallies were held in over 20 cities in nine countries including Australia, the United Kingdom, the Philippines and Japan. [NEWS1]

The Korean government designated Aug. 14 a national memorial day last year to commemorate the girls and young women who were forced into sexual slavery by the Japanese military during colonial rule, euphemistically referred to as comfort women.

A day ahead of Korea’s 74th Liberation Day, Moon wrote on Facebook that the Korean government will “do its best to help restore their dignity and honor” of the comfort women victims. He added, “from the universal perspective of humanity, we will share the issue of sexual enslavement by the Japanese Imperial Army as a message of peace and women’s rights and further disseminate it among the international community.”

Aug. 14, 1991 was the day Kim Hak-sun became the first survivor to break her silence and publicly testify about her horrific experience, encouraging other victims to share their stories and bring to international attention the plight of the tens and thousands of Asian women systematically forced to serve as sex slaves in the Japanese military’s frontline brothels during World War II.

Hundreds of people including several elderly comfort women survivors, the gender equality minister and lawmakers attended the government ceremony held at the Kim Koo Museum and Library in Yongsan District, central Seoul, which honors an independence hero. Actress Han Ji-min read a heartfelt letter written by the daughter of a victim who had concealed her painful past as a wartime sex slave.

The 1,400th weekly rally protesting Japan’s wartime sex slavery and demanding a formal apology from Tokyo took place from noon in front of the former Japanese Embassy building in central Seoul by an iconic statue symbolizing comfort women victims. These peaceful demonstrations have been held every Wednesday since 1992 and are attended by comfort women survivors, civic organizations and rights activists from around the world.

Other cities across the nation held similar rallies, along with activists in nearly a dozen Japanese cities including Tokyo, Hokkaido and Hiroshima.

The Seoul City Hall hosted a forum to spread awareness of the Japanese military sex slave issue Tuesday, attended by former U.S. Rep. Mike Honda, who sponsored a landmark comfort women resolution in the House of Representatives in 2007 calling on Japan to apologize.

The Northeast Asian History Foundation held another international symposium at the Korea Chamber of Commerce and Industry in central Seoul Wednesday, and Korean, Chinese and Japanese scholars tackled the topic of “Historical Tasks to Resolve the Japanese Military’s ‘Comfort Women’ Issue.”

They addressed concerns about historical revisionism by Japan, especially as bilateral relations are strained over Tokyo’s trade restrictions, seen as retaliatory measures to Korean court rulings on Koreans forced to work for Japanese companies during World War II. Yi Mahn-yol, a professor emeritus of Sookmyung Women’s University, noted that over 100 regions in Korea, as well as Okinawa in Japan, Taiwan, the Philippines, and U.S. and European cities have set up comfort women statues and memorials honoring the sexual slavery victims.

“However, Japan has denied the concept of sexual slavery in itself and instead has been blocking attempts to establish comfort women memorials around the world,” said Yi. “Rather than atoning for its cruelty, it is attempting to turn back history.”

Wang, who has researched the issue since 1997, recollected his interviews with comfort women survivors including Park Ok-sun, who he met some 20 years ago and had “clearly remember what she had endured.”

He added that Korea was the “first country to fall victim to the comfort women system” and that China was the country “with the greatest number of victims,” calling on “Japan to take legal responsibility.”

Historians generally estimate there were over 200,000 comfort women victims, and according to Wang, some 68 percent were Chinese women.

Japan claims that all matters of compensation for Korean victims were settled in a treaty that normalized bilateral relations in 1965. Seoul and Tokyo in December 2015 signed a controversial agreement aimed at resolving the wartime sexual slavery issue finally and irreversibly, which included an apology from Tokyo and a 1 billion yen fund for the victims.

The deal was criticized by victims and civic groups from its onset, and the Moon administration has called the comfort women agreement “flawed.”

“The Japanese government right now only puts a focus on protecting the Korea-Japan Basic Treaty and the 2015 comfort women deal and disregards any measures for the victims,” said Fumitoshi Yoshizawa, a Korean history professor at Niigata University of International and Information Studies. “An apology to the victims, compensation, historical education, building of memorials and the restoring of the victims’ honor through teaching about colonial rule, as well as the advancing of international human rights are not being considered at all.”

Yoshizawa acknowledged that the Korean Supreme Court found that the 1965 claims agreement did not include individual compensation for forced labor victims, along with the comfort women victims. He added that Japan needs to focus less on accusing Korea of infringing upon international law and more on “understanding history.”