Boycott of Japanese goods picks up in July

Boycott of Japanese goods picks up in July 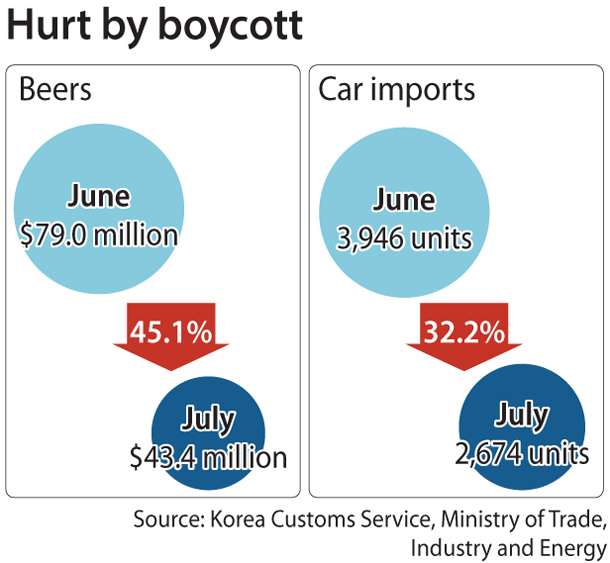 Japanese beers, once the preferred imported beer for many Koreans, are no longer on top of the list. Japanese car sales suffered, and data shows a dip in purchases of Japanese products by Koreans on their credit cards.

Since Japan implemented export restrictions on industrial materials to Korea in early July, convenience stores like CU, 7-Eleven, GS25 and Emart 24 stopped selling some Japanese beers and excluded all of them from their regular four-cans-for-10,000 ($8) won imported beer promotion.

As Japanese beer sales declined, Belgian beers took up some of the slack. Some $4.56 million of Belgian beers were imported last month, up 49.5 percent on month from $3.05 million. That made them the most imported beers by origin. Second place went to beers from the United States (with imports of $4.44 million), followed by Japanese brands. Dutch beers came in fourth with $3.1 million in imports.

Since surpassing U.S. beers in 2009, Japanese beers had remained in the top import spot every year. In the first half of this year, Korea imported $34.8 million of Japanese beers, way past $19.62 million for Belgian beers.

Until last month, Japanese beers had never lost their No. 1 status, even in monthly counts.

Beers were not the only boycotted Japanese products.

The Ministry of Trade, Industry and Energy said Thursday that the number of Japanese cars imported to Korea was 2,674 units last month, down 32.2 percent from 3,946 units a month earlier and down 17.2 percent from a year earlier.

The number of domestically manufactured cars increased 17.4 percent to 359,554 units in July from a year earlier, largely thanks to the production of SUVs.

Local automakers also had a good July in terms of exports. Car exports increased 11.6 percent from a year earlier to 215,927 units or $3.8 billion, up 21.6 percent from last July.

Koreans are spending less on Japanese goods generally, according to credit card data.

According to a report from the Financial Supervisory Service submitted to Rep. Lee Tae-kyu of the Bareunmirae Party, sales registered by eight local credit card companies in Japanese stores like ABC Mart, Uniqlo, DHC and Muji plummeted by 51.3 percent in the final week of July, totaling 4.98 billion won compared to 10.23 billion won in the last week of June.