[TOPPLING THE TROPES] Shying away from complexities: North Korean defectors find their stories are simplified in big-budget movies

[TOPPLING THE TROPES] Shying away from complexities: North Korean defectors find their stories are simplified in big-budget movies


Avid moviegoers may notice some tropes that have become increasingly popular in local films over the years. There always seem to be some roles that are reserved for certain kinds of people, or certain topics that call for certain types of characters. Whether true or not, some stereotypes seem to grow stronger with every film.

Are these tropes representing the truth? Or are they only reinforcing stereotypes or impressions people have that may not be totally accurate? Through the series, the Korea JoongAng Daily will take a look at some of the popular tropes in local films and take an in-depth look at how they affect the communities of the people they portray.


Take a look at almost any local movie featuring a North Korean agent these days and you’ll notice one thing: they are all exceptionally handsome. It has become almost a rite of passage in the Korean film industry - if you’re a good-looking rising actor, playing a mysterious North Korean special forces agent is in your future.

The country’s biggest heartthrobs have all had their turns playing spies sent to the South by Pyongyang including Kang Dong-won in “Secret Reunion” (2010), Kim Soo-hyun in “Secretly Greatly” (2013), Gong Yoo in “The Suspect” (2013), Hyun Bin in “Confidential Assignment” (2017), and last but not least, Jung Woo-sung in “Steel Rain” (2017). 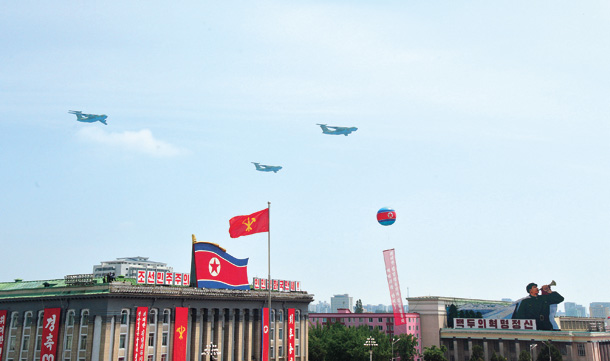 Putting on a good face

“It’s really hard to say that Jung Woo-sung, Hyun Bin, or Gong Yoo could plausibly be North Korean soldiers,” said Chung Nam, 46, a North Korean defector who came to South Korea with his family in 1997.

“I’m not saying that all North Koreans are small or skinny, but these films are far from reality. For instance, when I got on a train or a bus in the North, I could see the tops of almost all of the passenger’s heads. And I’m only 173 centimeters tall (5 feet, 8 inches).”

Despite their obvious departures from reality, Chung has enjoyed many recent films about North Korea, which depict the country in a friendlier light than in the past, even adding touches of comedy here and there.

“Before ‘Swiri’ (1998), I don’t believe there was a proper film made here about North Korea due to the anti-Communist and anti-North atmosphere,” he said. “But that film was the beginning of a change in narratives about North Korea on various topics - unification, the pain of being a separated country, and recently, the abundance of handsome North Korean spies.”

There have been so many local films about North Korea throughout modern history that it is easy to see significant thematic shifts in how the country is portrayed over the years. Kim Yong-hyun, a professor of North Korean Studies at Dongguk University, notes that the shifts go hand-in-hand with changes in politics and inter-Korean relations, often reflecting the nation’s attitudes towards the North.

“After the Kim Dae-jung administration, North Korean defectors were perceived as ordinary members of our society [instead of being seen as outsiders]” said Professor Kim. “And during that shift, I believe that as a way to dilute the negative images the local film industry had shown of North Koreans, film producers have purposefully selected attractive actors to play the main characters in their films.”

According to an annual report released by the Korean Institute for National Unification (KINU), the percentage of those who think of North Korea as a cooperative counterpart grew to 56.3% in 2019, compared to 36.3% just two years ago. The organization credits positive impressions made during the 2018 PyeongChang Winter Olympics, when North-South relations began to take a drastic upturn.

Film critic Kim Hyung-suk, on the other hand, thinks differently. “It is true that handsome actors began to play roles of elite North Korean agents ever since Kang’s role in ‘Secret Reunion,’ but I don’t think this pattern surfaced due to changing diplomatic relations between the two countries,” he said. “Rather, I perceive that the film industry used the theme of divided countries in order to introduce a lonely hero. If you look at all of the North Korean characters, they don’t necessarily represent the Northern side, because they’ve been cast out of their country.” 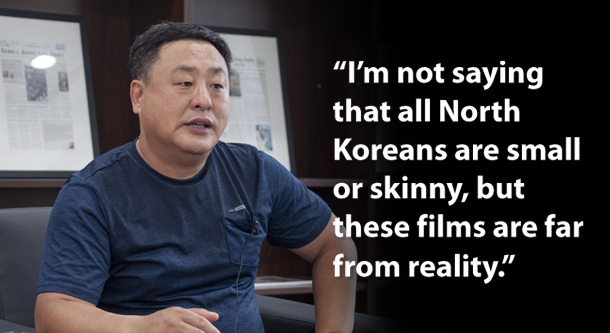 Chung Nam, 46, a North Korean defector who came to South Korea with his family in 1997. [JEON TAE-GYU]

However, these blockbusters aren’t the only films about North Korea that reach theaters. Films about how defectors escape the North and their struggles to adapt to South Korean society have been made as well, but without much fanfare. Movies such as “South of the Border” (2006), “Crossing” (2008), “The Journals of Musan” (2010), “48M” (2013), “Apostle” (2014), and most recently, “Ryeohaeng,” released on Aug. 8, have all tried to realistically depict those who have left their lives in the North in search of something better.

Unlike the major releases, however, the films are not box office successes and have failed to connect with the public at large.

“The journey of defecting the North and coming to South Korea is different for men and women,” Chung said. “For men, it’s relatively okay because they usually escape the country willingly, selling their labor to earn enough to travel to China or to the South. But for the women, you can say that almost all the women under 40 have been tricked or deceived into human trafficking in one way or another.”

This was the case for Han Young-ran, 52, who appears in the documentary “Ryeohaeng.” Originally, she intended to stay in China briefly to earn money and return home to take care of her young son. But on her way to China, she learned that she had been tricked and sold by a broker. “I remember desperately searching for any information about my son in China,” she said. “Then, I learned that he had died. After that, there was no reason for me to go back.” After living in China for 10 years, she came to South Korea in 2009.

Han added that human trafficking is even worse than how it is depicted in most films or on the news. “I knew how to fend for myself because I was an adult and had nothing to lose,” she said. “But the other girls who were sold with me, they couldn’t have been more than 20 years old. They escaped the country and were relying on these brokers. So these brokers - men in their 40s and 50s - threatened the girls and would rape them. It still brings me to tears to talk about them.”

Many who have seen these films often wonder how close they are to reality.

Professor Kim said that what the audience sees in these films is essentially true. “The process of defecting North is a matter of risking one’s life. They are crossing over borders, so of course there are casualties. The defectors usually travel by foot at night, walking across the Aprok and Tumen rivers to China.”

Despite accurate portrayals in some films, blockbusters are what most audiences see, and while films are no longer as antagonistic as they once were, Korean society remains largely unaware of the dangers and struggles that many defectors go through.

“I hope more films covering more diverse topics related to North Korea - particularly about defectors - come out,” Kim Su-in, a 31-year-old North Korean defector said. “When people’s awareness grows, I believe the people and related organizations will be able to come up with better, safer ways for North Koreans to come to the South or create more choices for those who want to lead lives away from North Korea.”

Film critic Kim gave the example of the recent film “The Spy Gone North” (2018) as one way to create more diverse films about North Korea.

“Although the film contains some action scenes, the genre is drama,” Kim noted. “The film was a box office success, drawing almost 5 million people to theaters because of its narrative about nuclear weapons and diplomatic relations between the two countries. So, I think other types of films can also become popular if the film organizers give more focus on the characters and the plots instead of using the subject of North Korea merely as a setting.”