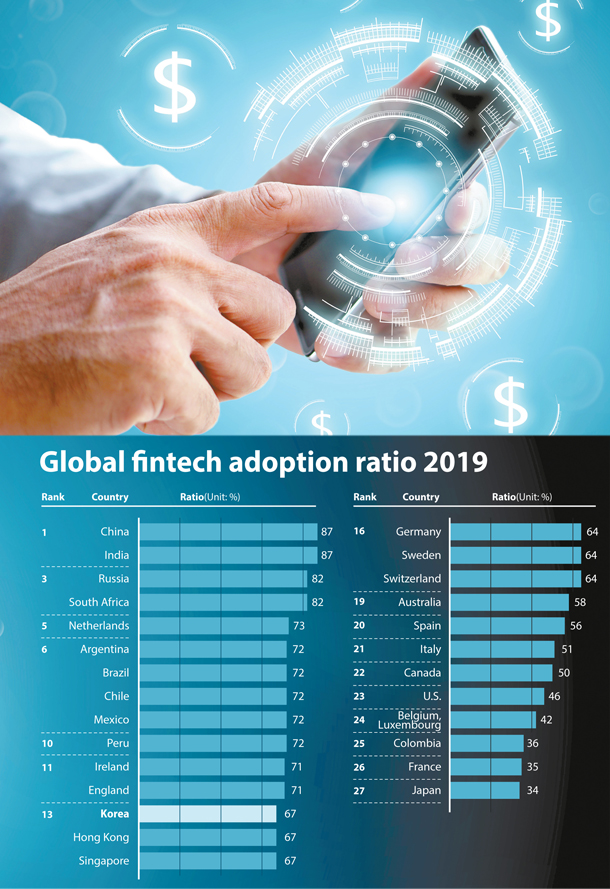 According to a recent study released by Ernst & Young, Korea’s fintech adoption rate this year was 67 percent. In 2017, the adoption rate was at 32 percent, even lower than the global average of 33 percent at the time.

But this year, Korea’s fintech adoption rate exceed the world average of 64 percent.

This puts Korea in 13th among 27 countries ranked in the study. It is at the same level with Singapore and Hong Kong.

The top places were taken by emerging markets, including China, India, Russia and South Africa. China and India shared the top spot, at 87 percent.

It is believed that customers in these emerging markets have actively used fintech services as an alternative to the weak traditional financial infrastructure.

In the case of China, credit card penetration was only 8 percent as of 2016. And many stores in China do not even have credit card readers.

In part as a result of these conditions, China has one of the widest distributions of smartphones, and related fintech, including mobile payments, has flourished.

On the other hand, advanced economies, including Canada, the United States, France and Japan have all been pushed out of the top 20.

These are countries with strong existing offline financial infrastructure. As such, fewer customers use fintech technologies.

It is also believed that financial regulations have prevented fintech from spreading rapidly in some places.

But a number of countries, including Britain, the Netherlands and Ireland, which have been aggressively easing financial regulations and implementing innovative technologies, have moved up the ranks.

Ernst & Young fintech adoption rate is based on a survey of more than 27,000 consumers in 27 markets. It charts the ratio of consumers who have used more than two fintech services in the last six months.

In Korea, fintech was most used for money transfers and payments. Services of this kind have an adoption rate of 76 percent. This high level of adoption was seen to be the result of the spread services that allow for payments via smartphone.

The global trend in terms of fintech adoption is that younger people with higher levels of education and higher incomes were more likely to use the digital finance service.

This trend was also found in Korea.

The adoption ratio of people in the top 25 percent income bracket was 72 percent, whereas the ratio was 53 percent for those in the bottom 25 percent.

The adoption ratio of people aged between 18 and 24 was 79 percent, while for those aged 65 or older, it was 54 percent.

Among the 27 countries surveyed, men were more active users of fintech than women in 25 of the countries. But in Korea and China, it was the other way around.

For Korean women, the adoption ratio was 68 percent, higher than the 65 percent for Korean men.

In China, the adoption ratio for women was 88 percent, whereas for men it was 86 percent.

In 14 countries, such as the United States, Japan, Canada and France, the adoption rate was 10 percentage points higher for men.

This is believed to be largely because Korean and Chinese women are more avid shoppers and enjoy spending on cultural activities.

“The study has found that there’s no major difference by gender in terms of digital technology use,” said Kim Jung-wook of Ernst & Young advisory. “Fintech companies increasingly offering services that target women has also played a role.”