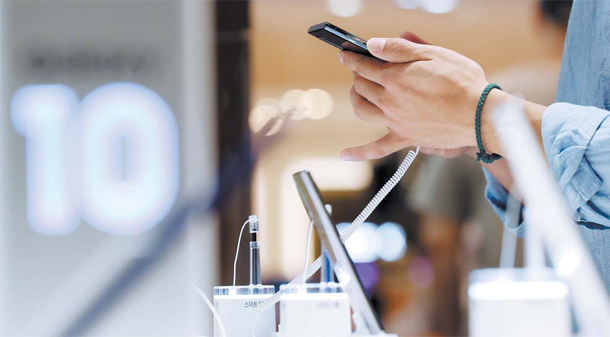 With the release of Samsung Electronics’ Galaxy Note10 in Korea last week, some phone shops have once again resorted to offering illegally large subsidies in an attempt to stand out in the hugely competitive local market.

On one online forum where people share bargain-hunting tips, several shoppers uploaded posts saying “I bought the Note10 at just 8 at Seoul’s sacred shop.” Under the code the posters use, “just 8” means 80,000 won and “sacred shop” means a store that sells phones with huge subsidies.

There are two major reasons why mobile carriers and retailers are willing to offer such large discounts to attract new Galaxy Note10 subscribers.

First, the phone has proven its popularity during the presales period. The number of early purchasers of the Note10 is about 20 percent higher than the preceding Note9, according to industry sources. On the first day of Note9 pre-sales, roughly 400,000 units were ordered. For the Note10, it’s likely that about 500,000 units were ordered on the first day.

Also, the new Samsung phone is 5G-enabled in Korea. As 5G phones and phone plans are more expensive than 4G devices and phone plans, mobile carriers are trying to attract as many 5G subscribers as possible. This is why carriers are willing to allow retail shops to offer large subsidies on the phone.

Considering mobile carrier-offered subsidies rose to as high as 780,000 won for the first 5G phone, the Galaxy S10 5G, the amount offered for the Note10 is about 300,000 won lower. That could still change during the presales period, as subsidies don’t have to be fixed until Aug. 20, when the Note10 actually hits shelves.

The problem, however, is that the so-called sacred shops are offering much higher subsidies than those announced by mobile carriers. The affiliated retail stores of each mobile carrier receive payments from the carriers each time they attract a new subscriber. These incentives are intended to reward the store for attracting a new customer. Some retail shops, including those known as sacred stores, hand part of that money straight back to the customer. This practice is illegal.

Considering the difference between the actual price of a Note10 and the 80,000 won apparently available at sacred stores, those shops must be giving back at least 700,000 won of the store’s money on top of the official 280,000 won to 450,000 won subsidiary offered by the mobile carriers.

“Headquarters spend the legal amount on subsidies and incentives for retail shops [when they attract new subscribers,]” a source from a mobile carrier said. “We cannot know everything that is going on at each retail store. We are strengthening the training of our retailers.”

However, it could be that the carriers know a lot more than they let on.

“Mobile carriers are expanding support funds to some retail shops as competition over the number of 5G subscribers gets fiercer with the introduction of the Note10,” said a source at a phone shop.

With news reports pointing out that the excessive competition has led to an unhealthy sales environment for 5G phones, the mobile carriers released a joint statement Tuesday saying consumers should avoid deals that look too good as the Note10 is still in the presales period. The carriers warned that there are cases where retailers offer excessively large subsidies and then disappear by the time the phone is actually released.

The carriers also added that since excessively large subsidies are illegal, customers may not be covered by guarantees and compensated for any damage, even if the retailer turns out to be fraudulent.

Meanwhile, industry insiders are expecting 5G subscribers to increase to as many as 4 million by the end of this year with the popularity of the Note10.

In the first half of this year, when the commercial 5G service began, there were only two 5G phones on the market: the Samsung Galaxy S10 5G and LG Electronics’ V50 ThinQ. There were also a lot of consumer complaints on the stability of the 5G network as the coverage was limited to greater Seoul. With 5G slowly stabilizing, new 5G phones like the Note10 are expected to greatly boost subscribers.

As the transition from 4G to 5G continues, competition between carriers to attract as many 5G subscribers as possible is expected to continue as they fight to gain leadership in the 5G era after all three carriers invested huge amounts of money to create their networks.

The carriers jointly promised in a statement that they will continue to compete by service quality, not with subsidies.