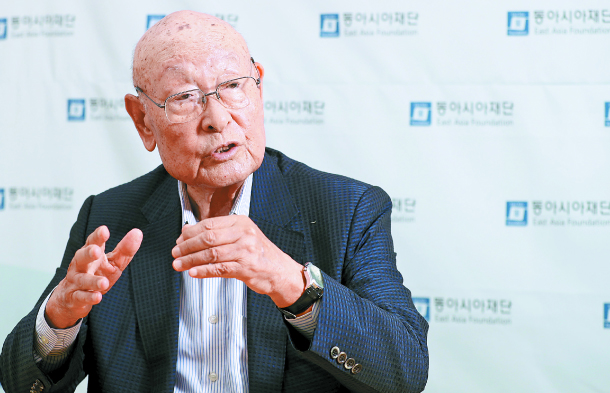 “To be honest, we had it coming,” said Gong. “First, in Japanese Prime Minister Shinzo Abe’s eyes, he would have thought the agreement between Korea and Japan regarding comfort women victims, which was something that he deems quite a difficult political decision, was destroyed by the Moon Jae-in government as soon as [Moon] took office.”

After entering the Ministry of Foreign Affairs in 1958, Gong served as a foreign affairs policymaker for 38 years and was in office during the normalization of diplomatic ties between Korea and Japan in 1965. He was the Korean ambassador to Japan from 1993 to 1994, which was when the 1993 Kono Statement admitted and apologized for the imperial Japanese Army’s forcible mobilization of sex slaves during World War II, euphemistically called comfort women. After Gong became the foreign minister in 1994, the 1995 Murayama statement apologized for Japan’s war aggressions. Today, he is the chairman of the East Asia Foundation, an independent, non-profit organization that seeks to promote peace and prosperity in East Asia through human and knowledge networks.

The JoongAng Sunday sat down with Gong late last month in a meeting room of the East Asia Foundation in Jongno District, central Seoul, to discuss the recent Korea-Japan row concerning the economy, politics and history.

Q. How were you involved in the 2015 bilateral agreement between Korea and Japan?

A. The December 2015 bilateral agreement between Korea and Japan that was supposed to solve the enduring issue of [comfort women victims] was something that was achieved with difficulty. We persuaded the Abe government by going back and forth between Korea and Japan to have meetings and got help from Yohei Kono, the former Japanese chief cabinet secretary who is also the father of Japanese Foreign Minister Taro Kono. Many people involved in Korea-Japan relationships, including former Japanese Prime Minister Yoshiro Mori and former Korean Prime Minister Lee Hong-koo, worked together in convincing Prime Minister Abe and former Korean President Park Geun-hye. Because something that was achieved with great difficulty was destroyed overnight, ill feelings remain.

How were the recent events between the two counties triggered?

The thing that drove a wedge between [our efforts] was the Korean Supreme Court’s ruling last year. In 1965, when diplomatic relations between Korea and Japan were normalized, they said that all rights of claims [for damages inflicted upon Korea during Japanese colonial rule] were resolved financially. It was a political decision. Following this decision, the Korean government in the ‘70s started compensating those who could prove that they were victims. This [compensation] continued until the Roh Moo-hyun government. The [Supreme Court] late last year ruled that individual rights to claim were still viable, which was the reason why the decision created conflict with Japan because Japan claimed that the issue was resolved. All of these cases piled up and piled up to create the situation today.

The Korean government separates its three powers into three branches: administrative, legislative and judicial. Isn’t this the reason why we have to respect the judicial branch’s decision?

The reason why I say we had it coming is because when the Supreme Court ruling was announced, a situation like this was inevitable. Last year, in around November, Prime Minister Lee Nak-yon gathered 20 to 30 people and heard what they had to say. I was there too. In the end, most of the opinions were about us compensating [victims] financially. If we did this with the assets of Japanese companies in Korea it would have created a big problem between the two counties, so [we came up with the idea] to create a fund. We were saying that we should suggest that all three parties, the Korean government, Korean companies that profited from the normalization of diplomatic relations and even Japanese companies create the fund.

Korea disbanded the Reconciliation and Healing Foundation aimed at compensating Korean women for their forced sexual slavery by the Imperial Japanese Army, to which the Japanese government contributed money. Do you think this affected the situation?

This is why Japan cannot accept the proposal. With the results as clear as day, how can a person create a situation like this without taking any measures? In some ways, I even question whether [the situation] was created intentionally. There was talk about people saying that the situation was created because of next year’s elections, but even though I don’t want to see the situation in such a twisted way, it is hard to understand. It feels like [the Korean government is] self-mutilating itself, as if the situation was fabricated.

How should we resolve the issue?

Doesn’t Japan want an answer for their proposal to Korea to form a third-nation arbitration panel to discuss the forced labor issue? This is a step in creating a treaty between Korea and Japan. Why can’t we go back to the 1965 normalization treaty with Japan, [a treaty where agreements were signed to settle property and claim disputes stemming from Japan’s colonial rule]. An arbitration panel is something that can help us reach an agreement. In order to resolve the situation, we need to think in a cool-headed manner. [Someone needs to] mediate the situation, and in the meantime, we need to try to freeze the sanctions [by Japan]. Meanwhile, who went to Japan behind the scenes?

I haven’t heard any news about anyone doing something like that.

Me neither. How can anyone not go behind the scenes [to mediate the conflict], which is such an important matter?”

Isn’t the president’s will on the matter a prerequisite for an envoy to be sent to Japan?

There is talk about the president having his own opinion on different things, which was the reason why several proposals had been submitted but never moved forward during that time. The lawsuit [regarding Japan’s wartime forced labor] started in Busan, and the lawyer that was in charge of the case was President Moon, who is now our president. He is in a different position than he was as a lawyer. In law, things are seen in A or B, and Cs do not exist. In Harold Nicolson’s “Diplomacy,” which is upheld as the textbook of diplomacy, there is a line that reads “the worst kinds of diplomatists are missionaries, fanatics and lawyers.” For lawyers, there is no option C.

How can we prevent politics from influencing diplomacy?

All of our citizens should work together, especially the media. Conscious or not, Koreans have strong anti-Japanese sentiments. In the end, I think this leads to votes and similar situations piled up against each other.

In a way, there had been discussions held. You know there is a lot of conflicts of interest between diplomatic issues and the domestic legal system in all countries. That is why there is a principle of “judicial restraint” in the United States. In Japan, they always include a judge who has a background in foreign affairs in their highest court. Many countries in Europe also implement a similar policy as well.

How do you see the Supreme Court’s ruling last year that said individual rights to claim for damages during Japanese colonial rule were still viable?

Two Supreme Court judges took the stance that [the damages were resolved in the 1965 treaty]. They respected the administration’s diplomatic decision. Problems occurred because the Supreme Court maintained its stance that “the rights of individuals to file claims for damages are still in place,” but Korea did not think about individual rights to file claims when we reached an agreement in 1965. We thought that was something that the country could decide [for individuals], at the time. In the 70s, I read a Japanese law journal that introduced a theory by Yasuaki Onuma, a professor of the University of Tokyo, who claimed that [Korean victims’] individual rights to file claims for damages are still in place. This was a theory that came from West Germany after World War II. This theory comes from Jean-Jacques Rousseau’s concept of human rights, which claimed that an individual right to claim is an innate right and cannot be infringed upon by the government. I think this idea has been spread across our Supreme Court judges. However, the administration is responsible for managing international relations.