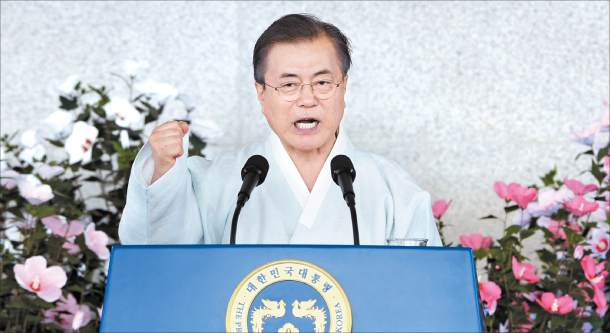 President Moon Jae-in delivers a speech to mark the 74th National Liberation Day on Thursday at the Independence Hall of Korea in Cheonan, South Chungcheong. [YONHAP]

President Moon Jae-in told Japan he would “gladly join hands” if it chooses to end the current diplomatic and trade war, while vowing to build “a nation that cannot be shaken” in his annual Liberation Day address.

As South Korea observed the 74th anniversary of its liberation from Japanese colonial rule, Moon spoke at the official ceremony in the morning. His speech came at a politically charged moment as relations with Japan hit their lowest point since ties were normalized in 1965.

Moon avoided straightforward criticism of Japan Thursday, indicating that he does not want to worsen the situation. Although he used emotional rhetoric to condemn Tokyo’s recent export restrictions and its removal of South Korea from a list of trusted trade partners in July, Moon’s rhetoric has been toned down this week.

In the speech, Moon noted that South Korea engaged in security and economic cooperation with Japan after liberation. Expressing hope that Japan will play a role in facilitating peace and prosperity ? while it contemplates a past that brought misfortune to its neighboring countries ? Moon stressed the importance of cooperation.

“Only when we work together will we be able to achieve joint growth that is sustainable,” he said. “The world has achieved common prosperity through a highly sophisticated division of labor. Japan has made progress by engaging in the division of labor upon the platform of the free trade order as well.”

“Within the international division of labor, if any country weaponizes a sector where it has a comparative advantage, the peaceful free trade order will inevitably suffer damages,” Moon said. “A country that achieved growth first must not kick the ladder away while others are following in its footsteps.”

“Better late than never: if Japan chooses the path of dialogue and cooperation, we will gladly join hands. We will strive with Japan to create an East Asia that engages in fair trade and cooperation,” he said.

Moon offered an olive branch by wishing the best for next year’s Tokyo Olympics, which ruling party politicians and liberal leaders in South Korea have suggested boycotting. “Just as people around the world witnessed a ‘peaceful Korean Peninsula’ at the PyeongChang Olympics, I look forward to seeing the Tokyo Olympics become a source of hope for friendship and cooperation,” Moon said.

Moon was dressed in a traditional Korean hanbok for the first time for the Liberation Day ceremony. In 2017 and 2018, he wore suits. His predecessor Park Geun-hye never wore hanbok for the annual commemoration ceremony, while former President Lee Myung-bak wore the traditional attire in 2008, 2010 and 2011.

The government also held the ceremony at the Independence Hall of Korea in Cheonan, South Chungcheong, for the first time since 2004. The symbolic memorial of Korea’s independence movements was built in 1987, and the government often hosted the Liberation Day ceremony there. Since 2005, the ceremony was hosted in Seoul.

Aside from the messages to Japan, Moon devoted most of the speech to his vision of making South Korea an “unshakable nation.”

Though an economic and cultural powerhouse, South Korea has yet to become “an unshakable nation” because it lacks sufficient strength and remains divided, Moon said. He vowed to uphold the free trade order, facilitate equitable cooperation in East Asia and transform the structure of the South Korean economy into an “ecosystem marked by inclusiveness and coexistence.”

“Until recently, Korea has been playing catch-up on advanced countries, but now our economy is evolving into one that helps set the pace, taking on challenges ahead of other countries,” he said. “In the face of Japan’s unwarranted export restrictions, we will continue our determined march toward becoming a responsible economic powerhouse.”

South Korea will also become a “country that serves as a bridge by taking the lead in promoting peace and prosperity on the continent and out in the ocean,” he said, overcoming its geopolitical disadvantage of being surrounded by four major superpowers.

“If we build a strong nation, we will be able to play a leading role in upholding peace and prosperity in Northeast Asia, connecting the continent with the ocean,” Moon said. “We must turn our country’s geopolitical position into a strength. We must establish a clear goal to take the initiative and not be pushed around by others anymore.”

Promoting his New Northern and Southern policies to diversify South Korea’s diplomatic partners beyond the superpowers, Moon stressed that his project of connecting severed railroads and roads between the two Koreas is a “first step toward a country that serves as a bridge.”

Moon said the goal of making an “unshakable country” will be completed with his vision of a “peace economy” and ultimately unification.

“If we combine the capabilities of the two Koreas, even while maintaining our respective political systems, it will be possible to create a unified market of 80 million people,” Moon said.

“Once the Korean Peninsula is unified, it is expected to become one of the six largest economies in the world. There have been research findings both at home and abroad that conclude that an era of a GDP per capita of $70,000 to $80,000 will be possible around 2050.”

“It is clear that there will be enormous economic benefits from peace and unification. New markets and opportunities will open up for both South and North Korean businesses,” he continued.

Noting that North Korea has also shifted its national policy to concentrating on economic development and is in the process of adopting a market economy, Moon said the international community has promised to assist the growth of a nuclear-free North.

“Our intention is not to unilaterally assist North Korea,” Moon said. “Rather, our intention is to promote mutual benefits for both Koreas and prosper together while guaranteeing the security of our respective regimes. The plan is for the two Koreas to contribute to the development of the global economy.”

Moon also tried to persuade critics of his vision. “Some people express skepticism regarding the wisdom of talking up a peace economy when North Korea is firing missiles,” he said. “However, we possess defense capabilities that are even stronger.”

“Although we are paying close attention and doing all we can to manage the situation to prevent the escalation of tension on the Korean Peninsula, the ultimate goal that these actions serve is dialogue, not confrontation,” he said. “I hope these skeptics face up to the reality: the United States is continuing dialogue with North Korea … while Japan is also seeking talks with Pyongyang. I hope these skeptics won’t remain prisoners to ideology.”

Moon, then, made rare political promises with self-imposed deadlines. It, however, remains unclear how he will deliver them as they all require the North’s responses.

“I pledge to solidify denuclearization and a peace regime on the Korean Peninsula during my term in office,” he said. “I will initiate the peace economy upon this foundation and move toward unification.”

“I pledge to solidify the foundation so that we can successfully host the joint 2032 Seoul-Pyongyang Olympics and stand tall in the world as one Korea by achieving peace and unification by 2045, which will mark the 100th anniversary of liberation,” he said.

He concluded the speech by saying that his vision will allow South Korea to ultimately outshine its former colonial ruler, Japan.