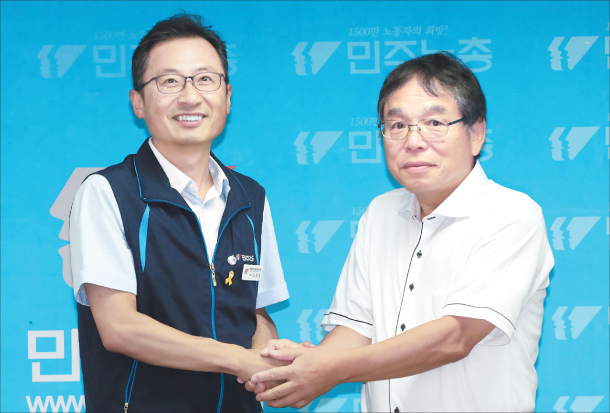 Yoshikazu Odagawa, president of Japan’s National Confederation of Trade Unions, known as Zenroren, said Thursday during a press conference at the headquarters of the Korean Confederation of Trade Unions (KCTU) in Jung District, central Seoul, that the Shinzo Abe administration was trying to resolve a diplomatic issue with an economic measure in order to rally support from his right-wing base.

Odagawa said it was crucial for his confederation to join forces with the KCTU to criticize the Abe administration and that his group was planning to participate in a rally on Aug. 27 in front of Japanese Prime Minister Abe’s residence in Tokyo to denounce the economic retaliations against Seoul.

The press conference was among a number of events Odagawa participated in Thursday as Korea celebrated its annual National Liberation Day, the day Korea gained independence from Japanese colonial rule in 1945.

The KCTU said in a press release Wednesday that Odagawa was scheduled to participate in at least three rallies Thursday afternoon in Gwanghwamun Square, central Seoul, that criticized Abe and promoted peace and labor rights. Zenroren, founded in 1989, has nearly 1.2 million members from 21 Japanese labor groups, the KCTU said.

Zenroren stressed it would cooperate with Korean citizens and laborers in blocking Abe’s “violence” and rally for Abe’s resignation.