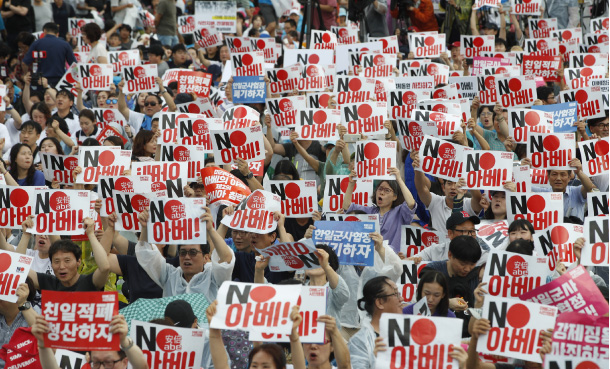 Members of Korean civic groups condemn Japan’s Shinzo Abe government at a rally at Gwanghwamun Square in central Seoul in commemoration of the 74th National Liberation Day on Thursday. [NEWS1]

Rallies held by Korean and Japanese civic groups and unions throughout central Seoul on Thursday to commemorate the 74th anniversary of Liberation Day of Korea were markedly targeted at the Shinzo Abe government, rather than Japan as whole.

“My only wish is to hear one word of apology from Abe,” said Yang Geum-deok, an 88-year-old woman who was forced to work at a military factory in Nagoya in 1944, at a rally in Seoul Plaza in central Seoul on Thursday morning.

“The world now knows what kind of suffering we experienced in Japan during those years. Let us all unite in condemning the Abe government.”

Yang was just 13 years old when she was forced to work at the factory and still suffers from an injury she sustained to her finger while there. Japan annexed Korea from 1910 to 1945 during which time at least 148,961 people were forced into labor in Japan, according to Korea’s Prime Minister’s Office. The office projected that around 5,000 of the victims are still alive as of last year.

The members of the Korean and Japanese civic groups gathered at Seoul Plaza, numbering around 2,000 according to the organizers, and marched toward the Japanese Embassy in Seoul, located near the Gwanghwamun Square in the afternoon.

“Prime Minister Abe made statements that Korea has violated the 1965 Korea-Japan agreement and international laws, which are totally nonsense,” said a member of the AWC at a rally in the square. “The Japanese government has never offered an official apology or compensation through the 1965 agreement.”

“[The Korean Supreme Court’s ruling last year] was one directed at the Japanese government and companies to compel them to confront the suffering of the forced labor victims,” Hideki Yano, a Japanese activist and head of a civic organization in Japan calling for the reconciliation of the forced labor issue, said at the rally in Seoul Plaza.

In apparent retaliation to the court rulings, Japan removed Korea from its so-called white list of trusted trading partners earlier this month, a move which Korea reciprocated on Monday by dropping Japan from its list of favored trading partners.

Some 750 civic groups announced earlier on Thursday that they will be holding a candlelight vigil at Gwanghwamun Square in the evening to condemn the Abe government and its policies, and expected about 100,000 people to attend.