The WMO is a specialized agency of the UN dedicated to international cooperation and coordination on the state and behavior of the Earth’s atmosphere, weather and climate. 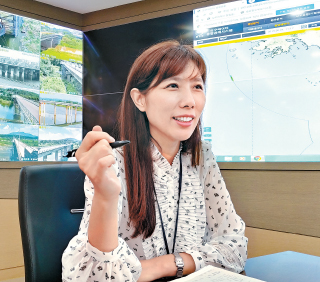 Kim Hwi-rin talks about her journey to becoming the head of the Hydrological Forecasting and Water Resources Division at the World Meteorological Organization. [KIM JEONG-YEON]

Kim will leave for Geneva, Switzerland, on Aug. 17, and will be working at the WMO headquarters in the city. She will be in charge of providing hydrologic information, assessments and forecasts so that countries are able to independently assess their water resources and respond to the threat of floods and droughts. Kim will hold the position of chief and P5 Professional Officer for two years.

“Before, the water resources field was centered on Europe, the United States and Canada, but since the population of Asia is large and there are many water disasters [in the region], I think that the WMO deemed the area a place where a lot of work is needed,” said Kim.

News about Kim’s new position as a division chief at the WMO was announced in May.

“I might have missed my chance to go [to Geneva] because the email announcing my acceptance was moved to my spam inbox,” said Kim. “But, they gave me a call. I was stunned because I didn’t expect it.”

Kim said that she developed an interest in water when she was young because her father was the captain of an oil tanker. Soon, her passion for water led her to study further into the subject.

Kim joined the Ministry of Land, Infrastructure and Transport as a water resources expert and has offered her expertise on the subject at the Han River Flood Control Office since 2005.

In 2012, Kim created an assessment tool with Korea’s Ministry of Environment and the Han River Flood Control Office for managing dynamic water resources, which is now available to the public at WMO’s website. Countries or organizations that have limited water resource analyzing technology can download the tool for free.

“There are a lot of countries that do not have an observatory, data and infrastructure,” said Kim.

“If the basic ingredient, [observation], is not good, there can be no good forecast results. Until now, WMO has been focused on [creating] an analyzing tool, but henceforth, it will need to help countries according to their situation.”

Since 2016, Kim has contributed to the WMO as a member of its hydrological forecasting field, which oversees water resources in 192 countries.

Kim’s journey to her position has not been easy. She said it is rare for women to study water resource management.

When she was doing her masters, she was the only female student focused on the subject.

Even after she became a water resources expert for the Han River Flood Control Office, Kim said other experts would only belatedly realize that she was a leader in the field when she attended academic conferences.

“Gender felt like an invisible wall for me,” said Kim. ”My life was a continuous [challenge] of proving myself.”

“I wanted to create a talent which I could boast ‘this is something that I do best,’” said Kim.

“I always think that in order to grab chances that come at you, you always have to be ready,” said Kim. “My doctorate degree and working as a member of WMO’s hydrological forecasting were not choices that I made to get the title of ‘chief,’ but in the end, it became my competitive edge.”