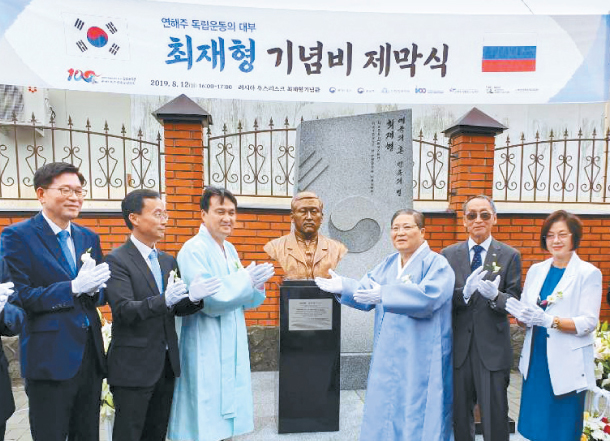 The bust of Korean independence fighter Choi Jae-hyung is unveiled on Monday in front of Choi’s old house in Ussuriysk, Russia. The event was attended by An Min-suk, the head of the Culture, Sports and Tourism Committee, third from left, and Valentin Choi, a grandson of the independence fighter, fifth from left. [PARK JOSEPH]

A committee commemorating the 100th anniversary of Korean freedom fighter Choi Jae-hyung’s martyrdom held a ceremony and unveiled a bronze bust of the hero on Monday at Choi’s old house in Ussuriysk, Russia.

Around 100 people attended the event, including Valentin Choi, 82, a grandson of Choi Jae-hyung and the president of an association for ethnic Koreans in Russia that are descendants of Korean independence fighters, and An Min-suk, the head of the Culture, Sports and Tourism Committee. Choi’s old house was converted into a memorial hall in April. The Korean Ministry of Patriots and Veterans Affairs contributed 1 billion won ($825,082) to the conversion project.

Choi Jae-hyung was recently put in the spotlight when President Moon Jae-in mentioned the freedom fighter in a speech to the Russian legislature in Moscow in June 2018. 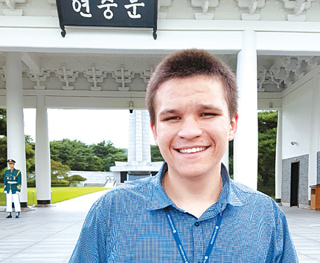 “Ahn Jung-geun, Hong Beom-do, Choi Jae-hyung and Yi Sang-seol and numerous Korean independence fighters came to Russia to seek asylum,” said Moon. “With the help of the Russian people, they could gather their strength and aim to reclaim [Korea’s] national sovereignty.”

Choi Jae-hyung was born on Aug. 15, 1858, coincidently the very same day that Korea regained its independence in 1945. Choi was born the son of a slave, and would have faced discrimination during the 1392-1910 Joseon Dynasty of Korea. His family soon heard of a “fertile land across the Tumen River,” which runs along the border of North Korea, China and Russia. The family moved to Russia to be free of discrimination and seek success in a different land. Choi is said to be the first Korean to enter a Russian school.

For four years, Choi lived in poverty and sometimes went to school with only his socks to protect his feet from the freezing winter conditions. He studied Russian for four years, but soon, he ran away from home after his sister-in-law treated him badly for depleting the family’s food.

Choi went to the Russian port city of Posyet and was taken in by a Russian couple. The couple taught him Russian and European culture, and soon Choi worked for the husband as a ship hand and set sail around the world.

Through the years, Choi supplied the Russian army as a military contractor, which made him one of the richest men in Russia’s Maritime Province. He soon used his assets for the greater good of Korea.

Even before Korea was under Japanese colonial rule from 1910-1945, Japanese powers were already influencing Korea in the shadows. Choi supported the fight to protect his homeland’s independence from Japan in the early 1900s by providing financial aid and military equipment to Korean independence fighters. He also conspired with Korean independence activist Ahn Jung-geun in assassinating Ito Hirobumi, the first premiere of Japan, on Oct. 26, 1909.

“A person called Ahn Eung-chil [Ahn Jung-geun] practiced shooting pictures of three people stuck on the walls of our house,” read a line in a memoir by Olga Choi, a daughter of Choi Jae-hyung.

Choi continued to support Korean independence fighters behind the scenes and supplied fighters with weapons and equipment in the Bongo-dong battle in June 1920, the first recorded victory by the Independence Army.

However, Choi was soon executed in April 7, 1920, by Japanese troops at a town where Korean settlers lived in Russia’s Maritime Province. His body was never uncovered and he was never buried in a grave. Soon, his family was deported to Central Asia by then-Soviet dictator Joseph Stalin.

The Korean government posthumously honored the independence fighter with the Order of Merit for National Foundation in 1962, 42 years after his death.

Now, the freedom fighter’s great-great grandson is coming to Korea to embrace his roots.

Ilya recently graduated from a high school in Moscow. Although his Korean is poor, Ilya said he is familiar with his great-great grandfather’s achievements.

Ilya said his grandmother would tell him stories about his great-great grandfather who built schools for Koreans and organized a group of Korean independence fighters.

In July 2018, Ilya was invited by the North Gyeongsang Provincial Government to spend six days in Korea and visit places where Korean independence fighters had spent their days fighting against Japan.

“I learned a lot about my [great-great] grandfather,” said Ilya in 2018, when he toured the country including the Seoul National Cemetery in southern Seoul. He added that he felt proud for being a descendent of an independence fighter hero.

Earlier this year, Ilya sat down for an interview with the JoongAng Ilbo. INU, upon reading the interview, contacted Ilya and invited him to come to Korea and study at their language school in February.

“We wanted to give a descendent of an independence fighter a chance to study in their homeland,” said Choi Yong-gyu, the head of INU’s board of directors. “We suggested [Ilya] enter our language school through our commemoration association [for democratization].”

Choi Jae-hyung’s commemoration committee is planning on hosting various projects with the independence fighter’s descendants starting with a ceremony in honor of the 100th anniversary of his death next year.