From Sweden to Korea

From Sweden to Korea 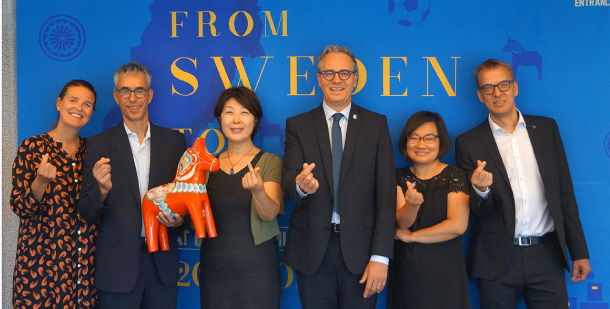 From left, Elenore Kanter, counsellor and deputy head of mission at the Swedish Embassy in Seoul, Christoph Heider, president of the European Chamber of Commerce in Korea, Lee Bock-hee, president of the Global Youth Fair, Jakob Hallgren, the Swedish Ambassador to Korea, Alice Choi, general manager of the Swedish Chamber of Commerce in Korea (SCCK) and Richard Molin, president of SCCK, celebrate on Wednesday at the Swedish Embassy the upcoming annual Global Youth Fair, named this year “From Sweden to Korea,” to be held at the National Museum of Korea in central Seoul on Oct. 19. The event consists of panels about Swedish education, exhibits on Swedish history and culture, booths to try Swedish food and Swedish musical performances. [GLOBAL YOUTH FAIR]