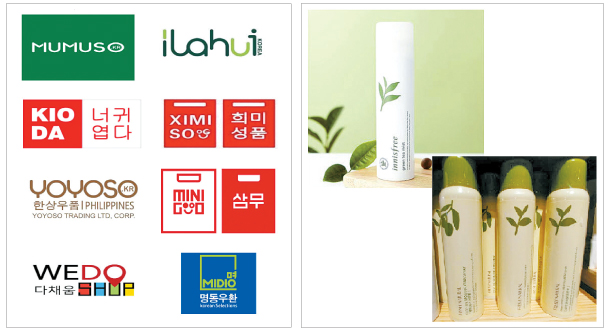 Left: A list of foreign brands that are made to look as if they are from Korea. Right: Facial mist from Ilahui that imitates the design of a product from the Korean cosmetics brand Innisfree. [KOTRA, KOTRA MANILA]

With the popularity of Korean culture globally, fakes were inevitable.

Products that look Korean, down to the hangul, are being churned out overseas to take advantage of Hallyu, or the Korean Wave, drafting off of the success of K-pop, K-fashion and K-dramas.

Mumuso, a cosmetics and daily item retailer based in Shanghai, looks Korean enough. It offers a wide variety of products that could be found in a Myeongdong retailer, from lipsticks to essences, and the branding hints at Korean origins. The word “Korea” is used liberally, with a “KR” and hangul on the branding everywhere.

But it is not a Korean company at all, according to a report by the National Assembly Budget Office and Korea Trade-Investment Promotion Agency (Kotra). Its owners are entrepreneurs from China.

The hangul is gibberish.

The company may not be Korean, but Mumuso is certainly riding the wave. It has shops open in 17 countries, including the United States, Australia, Vietnam, the Philippines, Thailand and India. According to the company’s website, it recently opened a branch in Toronto and has teamed up with a local company in Spain to establish its business in the European country.

This way of running a business could give consumers the impression that the brand is Korean, according to National Assembly Budget Office.

“The low-quality products disguised as being from Korea will not only erode faith in Korean products but could also taint the image of Korea,” wrote the National Assembly Budget Office in the report.

“The issue requires the government intervention.”

In a separate report, the Kotra office in the Philippines expressed concern about foreign brands that are “taking over Philippine retailers on the back of the Korean image” and expressed concerns over “the violation of the trademark rights and the damage such brands could do to Korean brands.”

Ilahui is a particularly effective copycat. Since entering the Philippine market in March 2017, it has opened 15 shops.

While the company says on its website that its products are “Korean-inspired,” its branding includes the word “Korea.” K-pop plays in its stores, and models in company advertisements wear hanbok, the traditional Korean clothing.

Kioda has 17 stores in Malaysia, Minigood has three stores there and Yoyoso four, according to Kotra. Fake Korean brands can also be found in Vietnam and Thailand.

Concerned about the problem, the government has discussed countermeasures. It fears that the knockoffs could harm Korea’s trade position. But it may have trouble taking any effective action, as the brands in question are in most cases only borrowing an image and not violating copyright.

The main strategy will be to attack the fakes utilizing competition laws and consumer protection bodies in other countries.

Police in Thailand, for instance, confiscated some 1,300 Mumuso products that violated disclosure regulations.

A public relations push is also on the agenda, educating the customers about what is real Korean and what is not and supporting the rights of Korean brands in foreign markets.