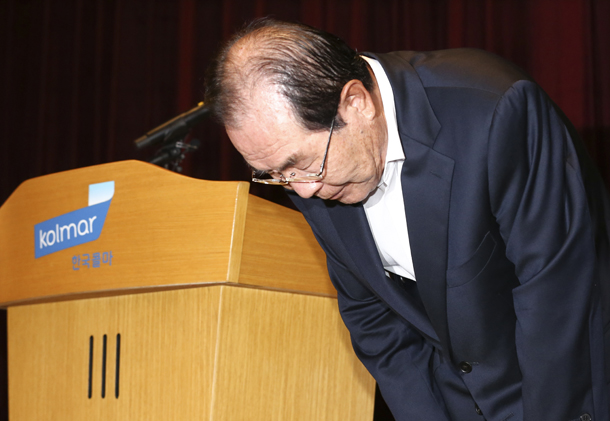 KIM JUN-YOUNG
The author is a political news reporter at the JoongAng Ilbo.

Yoon Dong-han, who founded and built beauty OEM empire Kolmar Korea over the span of 29 years, came down in just three days after a video his company played at an employee assembly on Aug. 7 caused outrage for its pro-Japanese and ultra-rightist comments. He bowed to the public in a press conference and resigned from all management posts. The YouTube video he played praised Japanese Prime Minister Shinzo Abe for his patience in stopping himself from punching President Moon Jae-in in the face.

The price of playing the video when the ruling party was raising a crusade to take on Japan was dear. The Democratic Party demanded Yoon kneel before the people while a member of the party called upon the National Pension Fund to withdraw all of its stock holdings in the company.

A Kolmar employee who claimed to have worked for the company for 10 years posted a plea for a reprieve for the company as it became a domestic target for the consumer boycott on Japanese brands.

He claimed that Yoon said he had not agreed entirely with the host in the YouTube video as he believed the comments to be too radical. Yoon’s patriotic activities also became known. He had run a fund to support the memorial activities for Admiral Yi Sun-shin, the legendary hero against Japanese sea invasions during the Joseon Dynasty (1392 - 1910). He also used 2.5 billion won ($2 billion) of his own money to buy an ancient Goryeo Dynasty (918 – 1392) Buddhist painting from Japan and donated it to the Korean national museum.

Still, nothing has helped the company and its nosediving stock. Over 1,100 employees are entirely focused on defending the company from the onslaught of negativity.

The Japanese food restaurant in Yeouido, western Seoul, near the National Assembly has been hit hard after a ruling party head’s dining came under fire by the opposition. Politicians stopped visiting in fear of being labeled “pro-Japanese.”

The Blue House stepped in to advise restraint in the feverish or politicized response to Japanese economic retaliations.

Most of all, slamming Japan should not be considered as being patriotic or nationalistic. Boycotts must be voluntary, lasting and broad to have any effect. It must not be abused to turn ourselves against each other. Our actions and words must have weight so that we do not prove to be “hot-headed” in the latest spat with Japan.