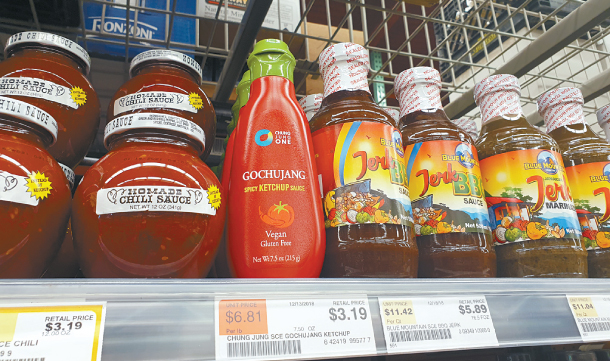 Gochujang ketchup is displayed at a branch of Wegmans, a Rochester, New York-based supermarket. [KWAK JAE-MIN]

Until recently, the few looking for it would just describe the product: Korean chili paste.

Last June at a Wegmans in New Jersey, a red tube with GOCHUJANG written in capital letters could be found in the aisles of what is normally seen a mainstream, suburban grocery.

It seems the customers now know exactly what they are looking for.

“Several years ago, gochujang in the United States was merely called as Korean chili paste,” said Yang Yong-taek, executive director of Daesang America. “Now as spiciness has become widely popular and people start to think of gochujang as healthy sauce from Korea, many local customers are looking for it. Now the name gochujang has become a common noun.”

The product has been localized, Yang says. It looks more like ketchup, and water has been added to alter the consistency to achieve a delivery more familiar. The product has been developed for customers more used to squeezing condiments rather than using a spoon.

In the global market, this red paste is gaining popularity. With healthy products gaining attention, Korean foods that are plant-based, fermented and also deliciously spicy are a key part of the trend. In the United States, Korean sauces, especially gochujang, are especially sought after.

Until recently, Sriracha has been the go-to exotic hot sauce. Manufactured in California by Vietnamese-American David Tran, it has drawn a wide following with its sweet-and-sour spiciness.

But tastes are changing, with millennials looking for a kick and an increase in the U.S. population of people with roots in Asian and South American culture, where spiciness can be on the more aggressive side.

The market is shifting away from Sriracha or Tabasco and more toward the deeper flavor of gochujang.

Where there is opportunity, there’s innovation.

Chungjungone, a producer of consumer food products in Korea, released a “Premium BBQ sauce,” mixing gochujang, salsa, kimchi and barbecue sauce. The product is sold across America through the Cincinnati-based supermarket chain Kroger.

Gochujang-in-a-tube products are also proliferating. Originally, the variants were confined mainly to chili pepper paste with vinegar, but now other combinations are being introduced.

Last year, gochujang made it in the list of the top 10 most searched words in Google’s American food category.