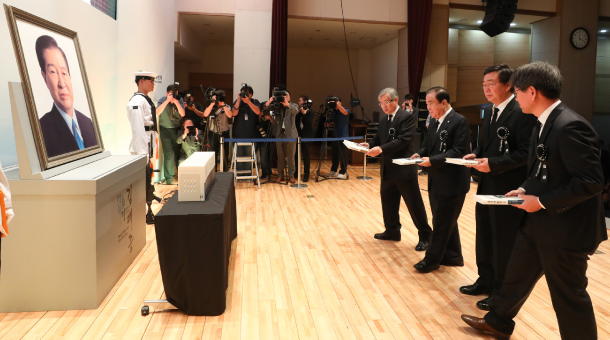 Leaders from both ends of the political spectrum gathered at the Seoul National Cemetery in Dongjak District, southern Seoul, on Sunday to commemorate the 10th anniversary of the death of former liberal President Kim Dae-jung, a Nobel Peace Prize laureate and lifetime advocate of human rights and democracy.

Kim, who was in office from 1998 to 2003, was best known for his Sunshine Policy of engagement with North Korea and his journey to Pyongyang in 2002 to meet with then-North Korean leader Kim Jong-il, marking the first summit between the two Koreas since the 1950-53 Korean War.

Kim Dae-jung died on Aug. 18, 2009 due to complications from pneumonia at age 85. His wife, Lee Hee-ho, a feminist pioneer and democracy champion, died last June 10 at 97. She had been receiving treatment for cancer and other illnesses.

President Moon Jae-in lauded Kim Dae-jung’s efforts for inter-Korean reconciliation in a statement posted on his Facebook Sunday, saying he had paved the way for peace on the Korean Peninsula by holding the first South-North summit in 2000. Thanks to him, Moon said, South Korea was able to hold a “successful peace Olympics” last year and muster up the courage to denuclearize the peninsula and yearn for economic cooperation with the North, through which both Koreas can prosper.

The declaration stipulated Japan’s “deep remorse and heartfelt apology” for its colonial rule over Korea, Moon noted, adding that both countries promised to “share the lessons of history and open a future of peace and prosperity.” Moon’s reference to Tokyo apologizing for its wartime atrocities was seen as a nudge toward the current Shinzo Abe administration to echo that repentant sentiment.

Hwang Kyo-ahn, chairman of the main opposition Liberty Korea Party (LKP), also underscored the joint declaration on Sunday during a speech at Kim Dae-jung’s memorial service, saying he paved the way for Korean culture to spread abroad by allowing South Korea and Japan to exchange their respective cultures.

Recalling Kim Dae-jung’s emphasis on the government’s role in diplomacy, Hwang warned the current government not to cause a “diplomatic failure.”

“There’s no country on earth that’s surrounded by four major powers like Korea,” Hwang said, “which is why Korea needs diplomacy more than any other country in the world. A diplomatic failure cannot be reversed unlike domestic political mistakes.”

Sohn Hak-kyu, chairman of the minor-right Bareunmirae Party, said that the joint declaration Kim Dae-jung signed with Obuchi in 1998, which aimed at reconciliation, should be the “foundation” of Seoul-Tokyo relations.

Rep. Chung Dong-young of the minor-left Party for Democracy and Peace said Seoul’s current relations with Tokyo are now at their lowest level, unlike in Kim Dae-jung presidency’s when they were at their best.